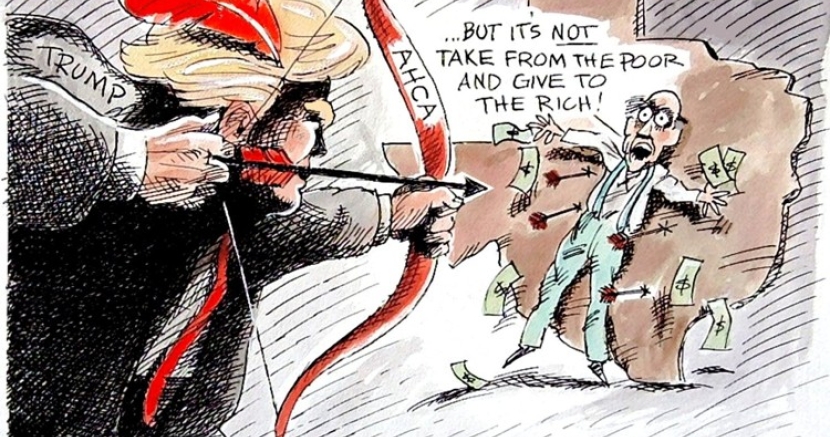 That’s what Texans can expect if President Donald Trump and the Republican U.S. Congress adopt anything like the House-passed American Health Care Act.

For this price, the wealthiest Texans — the top .1 percent, like their counterparts around the country — will receive tax cuts over $200,000. If ever there was a windfall deserving of the name “blood money,” this is it.

The AHCA guts protections for folks with pre-existing conditions. It cuts Medicaid so deeply — by $880 billion over 10 years — that some believe it could be a fatal blow. It allows states to drop mandatory coverage requirements on insurance companies. It will raise premiums for older people and sick people. Medicare takes a hit.

Before moving on to details some possible consequences for Texans, consider a fact that should be at the center of the health care debate: the American economy produces neither jobs nor personal income sufficient for tens of millions of Americans to afford medical care. This is not new — but it is often overlooked.

Ever since barbers gave up dentistry and doctors were given better tools than saws and little black bags of patent medicines, medical science has achieved wonders – but the wonders are expensive. The costs of medical care outpaced the economy. Private health insurance was invented in the 1920s to help deal with this. By the 1960s, however, even insurance costs were unaffordable to many. Medicaid and Medicare were established to close the gap.

By the 2000s, the number of uninsured not covered by federal insurance programs was so large that Congress passed the Affordable Care Act. Insurers could no longer deny coverage to those with pre-existing conditions. The purchase of health insurance was made mandatory to expand the pool of premium payers to keep costs down for the ill or elderly.

Trump and U.S. House Speaker Paul Ryan want to undo all of that. They traffic in the terrible myth that health care would be available to everyone if they’d just work hard enough. That ignores the fundamental fact that the economy has lost pace with medical costs. Through no fault of their own, millions can’t earn enough. Period.

The Trump-Ryan answer to that is, “Too bad.” To them and other AHCA supporters, the dollar is more sacred than the doctor.

There is still no Congressional Budget Office scoring of the AHCA as passed by the House. There’s noise out of the U.S. Senate that major changes may be in the offing. We can get a pretty good look at the impact in Texas of the GOP attack on health care, but in fairness we should recognize some uncertainty.

Texas could be hurt more than most states because we have a head start on policies which deny health care to millions. Republican leaders here refused to except federal Medicaid reform money.

This year, the Legislature could once again underfund Medicaid patient services, according to the Center for Public Policy Priorities. Sixteen percent of our population rely on Medicaid. The AHCA cuts the federal program by something like 25 percent by 2026. Three in five nursing home residents receive Medicaid funds today.

About 2.5 million Texans could lose their insurance coverage if AHCA became law. Because AHCA guts protections for those with pre-existing conditions, one estimate would have 775,000 more lose coverage here.

Also, it should be noted that personal bankruptcies have declined by 50 percent since passage of the Affordable Care Act in 2010. Before the ACA, medical bills bankrupted many. Today, not so much.

Add to that the lost productivity and billions in spending taken out of the Texas economy, it’s easy to see we’ll be the poorer for it. Additionally, local hospitals — already strapped — will likely be forced to raise taxes if they are to keep their doors open. Uncompensated indigent care will stagger them.

Is there any good news? Younger, healthy people could pay a little less. And, the Legislature is considering a bill that would allow Texas to receive any new federal money under AHCA that would help fund “high-risk pools” for those with pre-existing conditions.

Those pools failed miserably in the past, and given Texas leaders’ history of ignoring the state’s health care needs, it’s unlikely such a pool will mean much here.