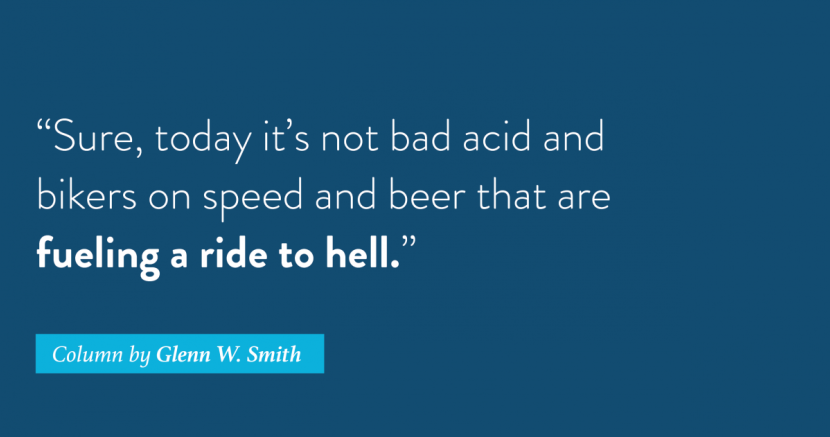 Watching America these days is like watching the film, Gimme Shelter. One of the most bone-chilling things about the Maysles Brothers’ controversial Rolling Stones documentary is that all through the film we know what’s coming: mayhem ending in tragedy.

The film was about the Stones’ free concert at the Altamont Speedway in California almost half a century ago, on December 6, 1969. Four people died. One was stabbed to death by a Hells Angel hired to provide security. Two were run over by a car thief who got away. Another drowned.

Grace Slick of the Jefferson Airplane watched a bandmate get beat up on stage that day. “It was not a good day all around,” she said in 2014. True enough, but it’s like saying the Hindenburg was a disappointing balloon ride.

Sure, today it’s not bad acid and bikers on speed and beer that are fueling a ride to hell. And, the players have swapped costumes. Conservatives (the term still seems wrong, like a hat that doesn’t fit) held up Altamont as the predictable outcome of the anti-authority 1960s. Now they are staging a kind of political Altamont of their own.

The figure of Donald Trump as a Rolling Stone may be poetic license taken a Mick Jagger prance too far. Nonetheless, there is something there to justify it. Maybe it’s the narcissism that disregards human consequences of all kinds except good ones that accrue exclusively to their creator, the king.

Events today are unfolding more slowly but with a cinematic rhythm similar to the one we feel down to our feet while watching the Altamont film. At the concert, the crowd tries but fails to awaken from the escalating violence. That only results in paralyzing panic, just like we sometimes feel during nightmares when our bodies immobilize us, preventing us from diving off our beds onto our heads.

A montage of Trump-era events, like the Maysles’ sequencing of the Altamont images, tells the tale. “Montage” is the technique of juxtaposing images in film, a device invented by a Russian, which makes its use fit the Trump moment even better.

Fade in: A sparse crowd, not even large enough to rush the stage at Trump’s inaugural.

Cut to: Chaos at airports around the world as Trump tries to ban Muslims from traveling to the U.S.

Cut to: A hot August day in Charlottesville, neo-Nazis and white nationalists march in support of a Confederate statue. One of the marchers runs over and kills a counter-protestor. Trump says there are good people on both sides of the melee.

Cut to: A family of U.S. citizens of Mexican heritage huddling in their apartment, nervously watching the ongoing harassment and intimidation of their brown-skinned neighbors by Trump’s immigration police.

Cut to: Trump’s lawyer arguing that Trump, as president, cannot break the law because he is the law.

Cut to: A darkened hotel room in Las Vegas, Nevada and the body of a man who has killed himself after shooting and killing 58 concert goers and injuring 548.

Cut to: Texas Lt. Gov. Dan Patrick’s parlor, where he wrings his hands over his failed effort to discriminate and terrorize transgender folk with a new bathroom law;

Cut to:  A videotape of Trump bragging about being such a star that he can sexually abuse women without consequence.

Cut to:  A defiant speech from Roy Moore, accused child predator running for the U.S. Senate in Alabama with the support of Trump and the national Republican Party.

There’s a lot more on the cutting room floor, but the picture is all too clear. The Trumpists are so convinced of their righteousness that they assume order and obedience will follow. They are blind to the growing disorder, to the certain truth that they are destroying protections they themselves have enjoyed from democratic institutions and laws.

It’s not unlike the Altamont promoters who assumed their music festival would be just another Age of Aquarius Love-In.