Don’t answer the fiscal suffering with even more suffering 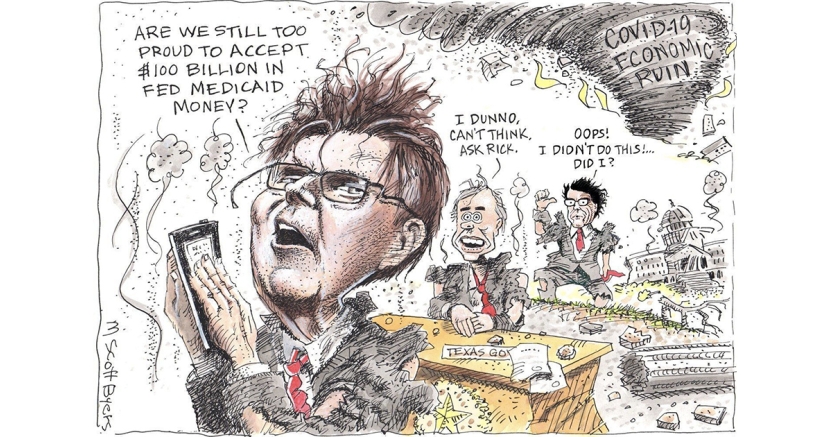 Glenn W. Smith
A lot of the demands to “open back up” from President Trump and his allies are just to set up later arguments that others are to blame for the economic losses.

As we begin to consider the future state and federal budget implications of the pandemic and its economic consequences, let’s recall the failures of the so-called “austerity” movement that followed the 2008 financial crisis.

This is prudent, because it’s a sure bet that the Republicans will use diminished tax revenue and trillions spent on relief actions to demand deep cuts in the safety net – Medicare, Medicaid, Social Security. Education funds won’t be safe, either.

So, let’s remind ourselves now that the European austerity plans of the late 2000s failed. In fact, Europe’s fiscal tightening reduced their GDP a full 10 percent compared to the U.S. Plus there was the human suffering that resulted from the austerity movement, which should have been called the cruelty movement.

All of us want stay-at-home orders modified or lifted as soon as it is safe to do. We want to get back to work. Still, a lot of the demands to “open back up” from President Trump and his allies are just to set up later arguments that others are to blame for the economic losses. Democrats, they’ll say, created the need for austerity by keeping the economy shut down too long.

In Texas, of course, the state budget will have to be balanced. It’s too soon to know what will be required, but rather than punish those who have been punished enough, let’s look elsewhere for ways to write a responsible budget.

First, Texas should immediately accept the $100 billion in available federal Medicaid funds. Back in 2013, then-Gov. Rick Perry rejected those funds. His successor, Gov. Greg Abbott, and other GOP leaders have continued that inglorious tradition.

Next, let’s attack the ongoing fiscal mismanagement that defines these decades of Republican rule in Texas. Denying health care to millions and underfunding education do not earn them fiscally conservative merit badges.

Instead, let’s eliminate some outdated and irresponsible sales tax exemptions. They amount to about $93 billion in the 2020-2021 budget. About half of those exemptions are needed because they are for items taxed under different laws. So, let’s say we might secure an additional $45 billion. In any case, a full examination of current tax exemptions should be conducted before we cut funds used to save lives.

Remember the debacle involving Accenture and the Texas Attorney General’s loss of almost $370 million on a child support enforcement system that never worked? That’s just one contract. How many billions could we save if we examined all of these contracts?

Keep in mind that elected officials like consulting services and other privatization schemes because the contractors are typically quite generous with campaign contributions and other benefits for those who make their businesses profitable.

Over the years, many of these irresponsible moves were disguised as “frugality.” Was it frugal to stick Texas hospitals with close to $7 billion in uncompensated care costs while rejecting Medicaid expansion?

That’s just one way the so-called frugality was responsible for our federal and state lack of preparedness for the pandemic that has caused such suffering. The last thing we should do is answer that suffering with policies that cause more suffering.