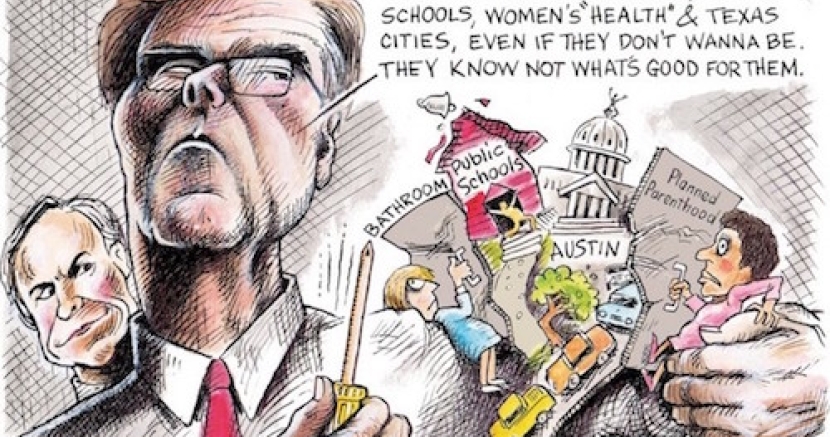 The Session at the Halfway Point: GOP Lawmakers Can't See the Forest Fires for the Trees

It was an old ritual of the high school rebels: light up our cigarettes in the bathroom. That’ll show the teachers and the principals who’s really in charge!

In our ritual conformity, we rebels were a rather sad spectacle, but we can put the behavior off to adolescent confusions. The same excuse can’t be made for Lt. Gov. Dan Patrick, who has turned the 2017 Legislature into an extended bathroom protest of his own.

The 85th Legislature’s regular session has slipped past the halfway point and — so far — most of the debate has been about who can use which bathroom in schools and other public facilities. Patrick seems obsessed with his own dark fantasies of bathroom dangers brought upon us by transgender folks.

Patrick presents himself as a rebel champion standing up to the cultural libertines in the principal’s office — but he’s really the vice principal! In any case, he’s pushed a bill through the Senate that would force transgender people to use the bathroom of their birth gender. It is unclear who will be the unzippering gender-checkers to enforce the law.

Where did all the transgender people go to the restroom lo these many decades, you ask? With you — and you didn’t even notice. Patrick and a few others created this bogus emergency overnight. They needed someone new to demonize — and this is who they picked.

In his frenzy, Patrick has created a serious civil rights issue. For instance, it wasn’t that long ago that bathrooms and water fountains were segregated by race. This new discrimination cannot stand — or sit, as the case might be.

Meanwhile, there are real and significant issues at hand, like the future of public education. Patrick wants to take your school tax dollars and give them to private schools. First, they starve the public schools; then they complain about their decline; then they try to steal the remaining money for their cronies in the private school business. It’s been a long con, but even many Republican lawmakers have seen through it by now. It stands little chance of passage.

Speaker Joe Straus’ House of Representatives wants to put close to $2 billion more in public education. Think of it as an investment in the future while Patrick, and to some degree Gov. Greg Abbott, are all about investing in an ugly past.

What else are we to say as they try to craft Jim Crow-like restrictions on voting that could pass judicial scrutiny?

How else do we characterize their efforts to return women to the health care nightmares of earlier decades by diminishing their access to quality care? Women, GOP legislators seem to be saying, should shut up and do what the menfolk tell them to do.

Another item designated an “emergency” by the governor – the only sort that the Legislature can consider until after its regular session halfway point – involves reforms of the state’s Child Protective Services. In an indescribably tragic scandal, hundreds of Texas kids died of abuse and neglect in part because of the agency’s failings. Credit where credit is due — and fingers crossed that we’re not too early with the praise — but both the House and Senate have advanced reform bills.

Pending are several efforts aimed at stripping the power of local voters to make their own decisions about their neighborhoods and cities. These include state overrides of ride-hailing ordinances and, most importantly, proposals to limit local revenues that could cope with, well, everything from traffic to schools to local hospital district financial woes.

The cap on local tax appraisals, a pet project of Patrick and state Sen. Paul Bettencourt, R-Houston, is in the Senate Finance Committee.

Speaking of smoke, conservative Republicans this session want to limit local officials’ abilities to remove trees from private property even if they’re found to increase fire risks. This is real-world “can’t-see-the-forest-fire-for-the-tree” blindness. Backers would see their cities burn before giving up a tree.

And they call environmentalists “tree huggers.”