Democrats’ positivity likely to win out over Trump ego 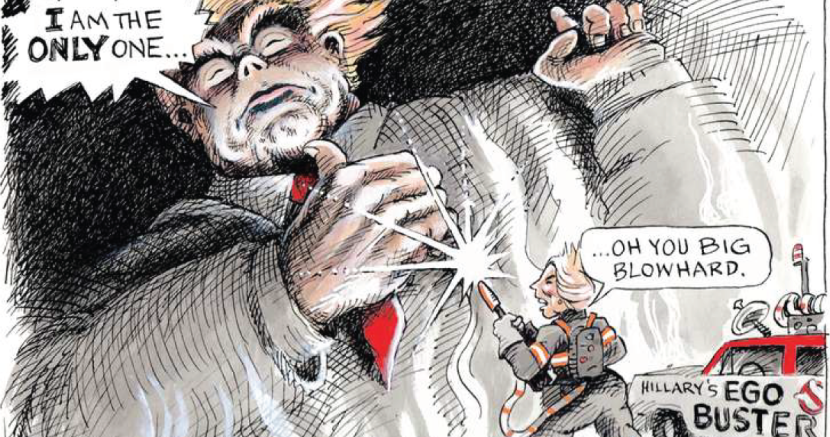 Glenn W. Smith
Whatever else might happen — and we’ve come to expect the unexpected — the themes set during the conventions will remain the focus of the campaigns.
The Democratic National Convention in Philadelphia and the Republican National Convention in Cleveland were something like a matter-antimatter collision: a lot of energy was released but the ultimate impact of the colliding conventions remains unclear.
So striking were the different visions of America that it was hard to believe they were actually about the same place and time. Donald Trump and the Republicans told us we have entered a dark valley of violence and despair. Hillary Clinton and the Democrats told us we live still in a shining city on a hill.
Visually, the GOP gave us the most dissonant imagery. Outside the Cleveland convention hall we saw carefree delegates cavorting in the sun, safe and happy. Inside the convention hall they all went to hell or, anyway, to Trump’s hellish vision of our country.
The contrast was a reminder that the mood of many Americans might be more hopeful and positive if they weren’t captive to TV’s relentless sky-is-falling reporting and the political exploitation of what bad news there is. If CNN’s Wolf Blitzer came to dinner he could make “pass the gravy” sound ominous. “This just in: Gravy shortage threatens.”
Still, the contrasting visions from the conventions give us a glimpse of what to expect from the campaigns between now and the election. Whatever else might happen — and we’ve come to expect the unexpected — the themes set during the conventions will remain the focus of the campaigns.
Democrats leave the conventions with a decided advantage. The economy is healthy. Millions of new jobs have been created during the years of a Democratic administration.
The crime rate is half what it was in 1991. Experts tell us that growing anxiety about crime is due to an “Alice in Wonderland”-like paradox: Crime is low so there is much less direct experience of crime, therefore people’s views are shaped even more by exaggerated crime-focused TV news and entertainment.
The global order, including the rise in non-state terrorism, presents us with tough and growing challenges. And there is no doubt that globalization continues to hurt some Americans as corporations move manufacturing facilities to cheaper labor markets overseas.
With apologies to Charles Dickens, however, it is neither the best of times nor the worst of times. We seem to be living in pretty much average times with plenty of opportunities and plenty of challenges.
Focusing exclusively on all that is frightening in America and the world, at one point Trump said, “...only I can fix” all the problems, emphasis on the “I.” The rest of us, it seems, can go fetch more gravy.
Clinton and the Democrats, on the other hand, focused on good news: the economic recovery; millions of more people with health insurance; the hunting down and killing of Osama bin Laden; expanded civil rights and a generally more inclusive, tolerant culture, despite the emergence of a renewed subculture of hate.
According to Gallup, for the first time ever voters came away from the Republican convention less likely to vote for the GOP nominee. Trump flopped, and we can expect Democrats to keep exploiting his significant weaknesses.
In the days following the convention, the father and mother of a fallen American hero captured America’s collective imagination. Their son, Capt. Humayun Khan, was killed in Iraq in 2004. Khizr and Ghazala Khan spoke during and after the Democratic Convention about their love of America and the failings of Trump and others to live up the Constitution.
In return, Trump attacked the patriotic Khans. He hurt himself. We can expect this kind of pattern to continue. The needs of Trump’s ego dominate all else, and he will continue to overreact to setbacks and criticism. When Trump pounds on a podium all he gets is bruised knuckles.
Clinton and the Democrats will continue to campaign on a realistic view of America’s challenges and opportunities. They will brag about the successes of the Obama administration while highlighting the need for change. Key among those changes will be a renewed effort to lift the economically insecure and those left behind by the globalized economy.
That strategy and the unappealing egoism of Donald Trump should mean a Clinton victory in 2016. However, the nation remains divided, and the election will be closer than some might think.
Tags
2016 Election
Donald Trump
Hillary Clinton