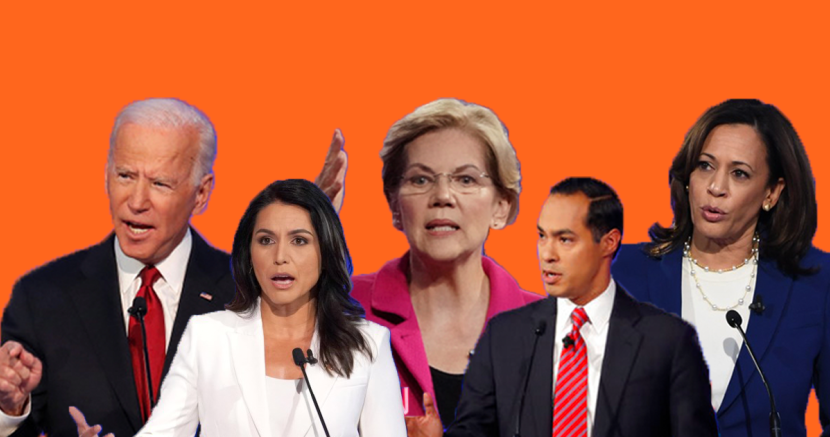 In the last few Democratic debates, we’ve seen hardly any conversation about abortion or reproductive rights. But in the most recent debate, candidates were given the chance to talk at length about their plans to address the ongoing attacks on abortion in our country.

Sen. Kamala Harris was the first to bring up the issue after moderators asked a question about health care early on in the debate.

Harris pointed out that this is the sixth debate held during this presidential cycle (including the back-to-back debates) and there’s hardly been anything said about “women's access to reproductive health care, which is under full-on attack in America today.”

“People need to keep their hands off of women's bodies and let women make the decisions about their own lives,” Harris said.

Then later, Sen. Cory Booker followed up on the issue and said women should not have to be the only ones taking up this fight.

However, it wasn’t until later in the debate when moderators asked a question directly about abortion that many of the candidates had a chance to speak on the topic.

Moderators asked the candidates how they would stop recent state laws that have banned abortion after six or eight weeks of pregnancy.

Here’s what each candidate who spoke on the issue had to say (in order):

Harris said she would instruct the Department of Justice to review the laws passed by states to determine if they are compliant with Roe v. Wade and the U.S. Constitution. If not, Harris said those laws would not go into effect.

“The reality of it is, this is still a fundamental issue of justice for women in America,” Harris said.

Klobuchar said she would codify Roe v. Wade and make it the law of the land. She then addressed Donald Trump’s history on abortion, reminding the audience that he said he wanted to put women in jail for getting abortions and doctors in jail for performing abortions.

“You, Donald Trump, are not on the side of women,” Klobuchar said.

Booker talked about how restrictive abortion laws are especially harmful to low-income women. He said he would create the Office of Reproductive Freedom and Reproductive Rights in the White House, fight to codify the law, and work to repeal the Hyde Amendment.

Booker said these restrictive laws are “an assault on the most fundamental ideal that human beings should control their own body.”

Utilizing an outdated and stigmatizing talking point, Gabbard said she believes abortion should be “safe, legal, and rare.” Gabbard also said she supports codifying Roe v. Wade, but thinks there should be some restrictions in place.

“This is often one of the most difficult decisions that a woman will ever have to make,” Gabbard said.

After Gabbard’s response, the moderators switched up the question by asking about the Supreme Court.

The Court just announced it will hear arguments in a case challenging abortion rights. With Justices Brett Kavanaugh and Neil Gorsuch now on the Court, the future of abortion rights in our country feels uncertain for many.

The moderators asked if Roe v. Wade is overturned and there was no abortion legislation passed in Congress, would candidates seek to add justices to the Court to protect women's reproductive rights?

Biden said he would not pack the Court. He also said he would work to codify Roe v. Wade and make sure the people he recommended for the Court supported the right to privacy.

“Reproductive rights are a constitutional right,” Biden said. “And, in fact, every woman should have that right.”

Buttigieg spoke about different reforms he would consider to depoliticize the Court, including expanding the size of the Court, term limits, and a rotation off the appellate bench.

“I'm not wedded to a particular solution, but I am committed to establishing a commission on day one that will propose reforms to depoliticize the Supreme Court, because we can't go on like this,” Buttigieg said.

Warren said she lived in an America where abortion was illegal, but that rich people still got abortions. She said that three out of four Americans are in favor of Roe v. Wade, and with support like that, you should be able to get legislation passed through Congress.

“We should not leave this to the Supreme Court,” Warren said. “We should do it through democracy, because we can.”

Many of the candidates made good points and spoke on the issue relatively well. We agree that Roe v. Wade must be protected and Congress should take steps to pass abortion legislation to ensure it is legal and make it more accessible.

Additionally, the states passing unconstitutional abortion bans and limiting reproductive rights must be held accountable. All people should have control over their own body and be able to make their own health care decisions.

That being said, there were some candidates that used outdated and offensive talking points. We’re looking at you, Tulsi Gabbard.

As someone who had an abortion, this is deeply offensive and stigmatizing. You don’t need to lean into the stigma & decades old talking points. It’s unhelpful and makes it seem like those of us who had abortions did a bad thing. There will be as many abortions as we need. Period. https://t.co/jBBs7qTEBb

Messaging like this shames people who’ve had abortions and must be avoided in future debates. It pulls the conversation backward instead of moving it forward.

Another takeaway? Candidates need to say the word “abortion.”

Of the eight candidates who were asked a direct question about abortion, six avoided using the word and instead went with euphemisms such as “reproductive rights” or “a woman’s right to choose.”

The only two candidates to actually say the word were Elizabeth Warren and Tulsi Gabbard, although Gabbard in no way represented the gold standard.

It’s important not to skirt around the topic or use phrases like “reproductive rights” to avoid having to say “abortion.” Just say the word! Democrats should be working to end the stigma, not reinforcing it.

Overall, we’re happy candidates finally had the chance to speak on abortion during last night’s debate.

These conversations must continue and we look forward to hearing more from candidates about their plans to make abortion more legal, accessible, and safe.