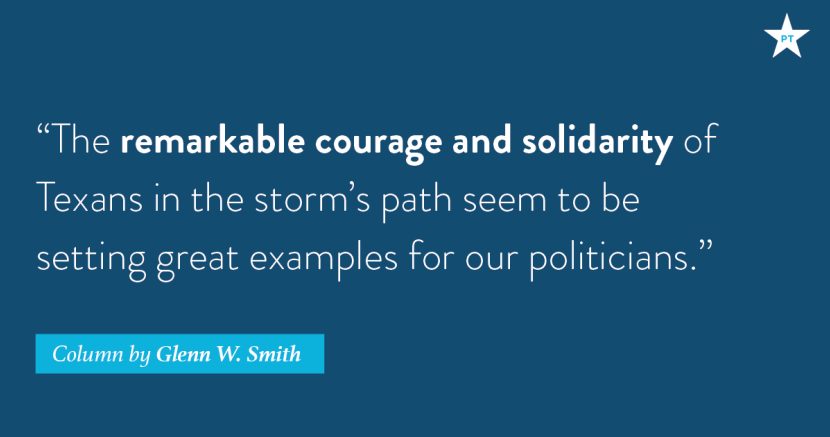 Glenn W. Smith
There are rays of hope in the government response to Hurricane Harvey.

Paul Vance, the guy who wrote the lyrics, “Catch a falling star and put it in your pocket, save it for a rainy day,” has been living in South Florida. As Hurricane Irma approaches, here’s hoping Mr. Vance took the advice of Perry Como’s 1957 hit song.

“When your troubles start multiplying,” the song says, your pocketful of starlight will help you overcome them.

The far-right Empower Texans praised Texas legislators for saving those funds last session from the Visigoths who (Gasp!) thought to spend a bit of it on public education. See, they said after the storm, all that rainy-day money is there to use for rebuilding Southeast Texas. Today, though, they don’t seem to be beating their rainy-day drum as loudly.

Still, credit where it’s due. Gov. Greg Abbott has appointed John Sharp, the former Texas Comptroller, to head up the recovery effort. Sharp became somewhat famous for his “Reinventing Government” initiatives in Texas and Washington, D.C. in the 1990s. I think everyone would agree that innovation and reinvention are good things after a storm like Hurricane Harvey.

Sharp, a Democrat, is a skilled administrator who’s easy to work with. He gets the importance of improving the morale of those in need. He is, after all, the chancellor of Texas A&M University. I kid, of course.

It’s also heartening to see state leaders look for innovative ways to address the immediate needs of folks displaced by the storm.

For instance, Democratic state Rep. Carol Alvarado and Republican state Rep. Mike Schofield, are urging a faster and more efficient way of getting people back in their homes. Rather than house flood victims in temporary trailers miles and miles from their schools, jobs, churches and neighborhoods, they want the state to take advantage of a federal program that “de-mucks” flooded homes immediately, allowing folks to move in before additional repairs are made.

That program is called Sheltering and Temporary Electric Power (STEP). Local contractors are paid to quickly treat homes for mold, repair damaged sheetrock, and make electrical and plumbing repairs. Folks are home even if larger repairs are necessary.

Programs like that benefit all of us, directly and indirectly. People forced to live miles from home can’t get to their jobs. Employers, then, are handicapped. Sales drop. The economy suffers. Schools suffer as kids can’t return to their usual classrooms. Personal transportation costs soar.

Storms do a lot of their damage long after they have passed. Call it the Shadow of Storms. Living – or trying to live – in the Shadow of Storms isn’t easy. The damage of Hurricane Katrina was terrible. And a lot of damage came after the storm as displaced people had to begin their lives all over again in new towns or cities. Families were separated. New jobs were hard to find.

The remarkable courage and solidarity of Texans in the storm’s path, and those who voluntarily entered that path to help those in need, seem to be setting great examples for our politicians. That is, after all, the way it supposed to work in a democracy.

Things will have to be done differently to better protect ourselves from storms like Hurricane Harvey. A less pinch-penny approach to infrastructure investment would be wise.

And, it might also help to remember what we told ourselves when we saved those falling stars in our pockets, when we set aside money for tomorrow’s stormy needs. “Aren’t we prudent,” we said. “Aren’t we smart to save for a rainy day.”

Let’s keep being smart as we rebuild Texas. The folks back home sure are.