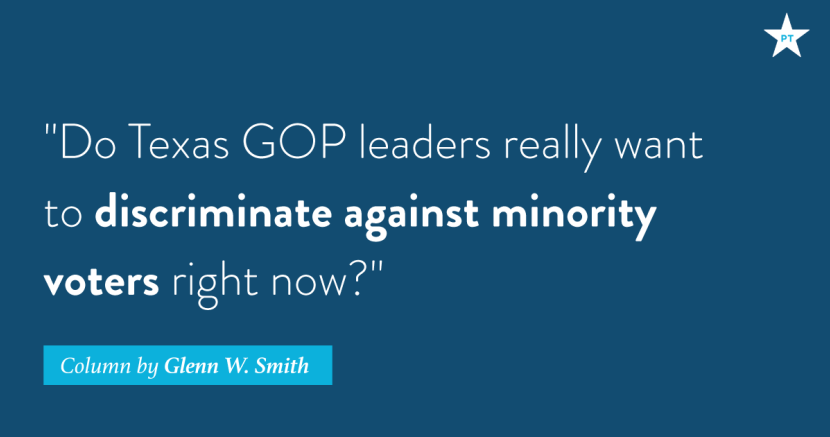 The Case of the Stolen Donuts

The proposed ban on straight-ticket voting may lead to renewed federal supervision of voting laws.

Republicans in the Texas Legislature are seriously considering banning “straight-ticket voting,” the one-click convenience that allows voters to choose all the candidates on the ballot from one party or another.

The bill, HB25 by state Rep. Ron Simmons, R-Carrollton, is in the Calendars Committee in the House. With the support of Republican House Speaker Joe Straus, it could be headed for easy approval.

Think of Simmons’ bill as an easy, one-click Republican convenience that further suppresses the votes of Texas minorities, especially those in heavily populated urban areas. It’s the Republican’s own straight-ticket vote to give them a procedural edge at election time.

Republicans need to think this through.

Earlier this month, a federal three-judge panel in San Antonio ruled that the GOP-controlled Legislature intentionally discriminated against minority voters when they drew new Congressional district lines. The court ruled they violated the Constitution and the Voting Rights Act. A similar case is pending with regard to state House redistricting.

The court’s redistricting ruling could mean Texas would once again have to pre-clear with a federal court or the U.S. Justice Department all changes to voting laws under the VRA’s Section 5. In 2013 the U.S. Supreme Court struck down the formula by which political jurisdictions with histories of discrimination were included under Section 5. But further acts of voter discrimination could place a state back under the pre-clearance requirement. Hello, Texas.

Republicans, found by federal courts to have intentionally discriminated, are, with their proposed ban on straight-ticket voting, doing it again.

They  “Where’d you get those donuts?” the judge asks. “I stole them,” answers the accused thief.

In recent elections, Democrats appear to have regained some advantage with straight-ticket voting, especially in urban areas with large minority populations. The increasing power of Democrats in these areas is one reason Gov. Greg Abbott and other GOP leaders are attacking voter control on local issues. In fact, Abbott wants to effectively turn local governments into mere agencies of his office, handing the state complete control of Texas neighborhoods and communities.

That kind of thinking is also behind the GOP’s assault on straight-ticket voting. If their opponents now have the advantage with its use, they’ll simply ban it and eliminate the advantage. The problem for Republicans is that it looks like – and is – just another assault on minority voting rights.

And it’s coming at the very moment they’ll be trying to convince the courts not to put the state back under federal supervision of voting laws. Just like the thief and his stolen donuts, they are confessing their bad behavior with their actions.

Do they really want to do that?

Republicans are frustrated with recent outcomes in urban county judicial races. Straight-ticket voting has led to significant Democratic victories in these races. Republicans want to remove the voter straight-ticket convenience in hopes that many voters won’t bother to complete their ballots if they have to vote individually in dozens and dozens of races.

Straight-ticket voting undeniably makes voting easier. It shortens wait times, and that’s no small matter. To take just one example, consider Texans who work more than one job to make ends meet. If they go to their polling places before heading to their second job and find a line stretched around the block, they may not have time to stop.

All this raises the bigger issue, of course. It’s time to curtail partisan control of election procedures. Most observers agree that partisan gerrymandering shares much of the blame of our political dysfunction. Lawmakers are choosing their voters rather than voters choosing their lawmakers.

The GOP passes voter suppression laws to guarantee themselves advantages at election time. Justice and an open and fair democratic system are programmed out of the legal election machine. The machine they design subverts democracy by favoring particular political outcomes.

As 'Roe' hangs in the balance, Texas must elect more women
6 days ago

5 Texas takeaways from the January #DemDebate
1 week ago