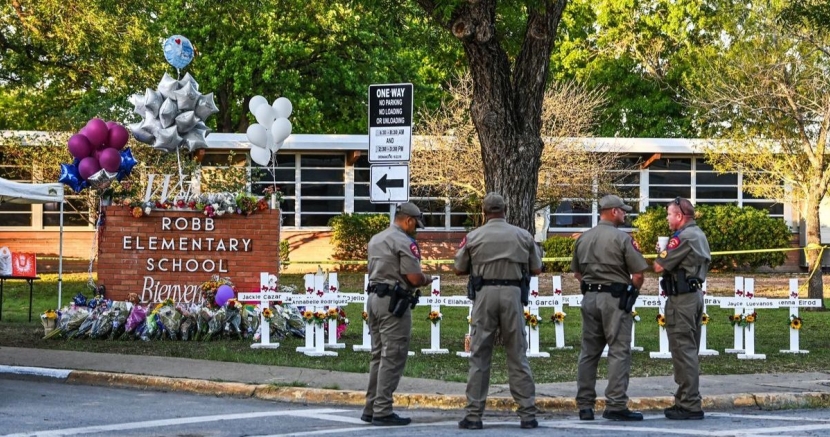 Arabella Cadena
How will the bipartisan gun deal impact the landscape of gun violence in America?

This 4th of July instead of enjoying parades and fireworks on the TV, Americans watched news coverage of the 309th mass shooting of 2022. At a parade in Highland Park, Illinois, 21-year-old Robert Crimo III opened fire from a rooftop and killed seven people. The shooting took place less than ten days after President Biden signed into law the first major federal gun safety legislation to pass Congress in decades.

The Highland Park shooting was one of many gun violence incidents to take place over the 4th of July weekend. Meanwhile in Texas, the families of the 21 victims of the Uvalde shooting await the release of footage showing 77 horrifying minutes of police incompetence. Americans are tired of living in the aftermath of entirely preventable tragedies. The Bipartisan Safer Communities Act that was signed into law by Biden promises to save lives, but the act falls short in many ways. Here are three insights into the impact this bipartisan gun law may have on future common sense gun legislation.

The bulk of the bipartisan bill provides funding to expand community and school-based mental health services for children and families, telehealth mental health services, and implement safety measures at primary and secondary schools. A must-have for Republicans who have taken to blaming gun violence on mental health as a political strategy to divert attention from the real issue: access to guns.

To be sure, investments in mental health infrastructure are essential. Especially promising is the $150 million allotted toward suicide prevention and the over $40 million allocated to school-based and community trauma support. However, focusing on mental health and school safety in a gun control bill enshrines in law that they are acceptable forms of gun violence prevention when they are absolutely not.

If the Robb Elementary School footage can tell us anything, it's that school security measures and police are incapable of preventing and stopping gun violence. Law enforcement officers in the US shoot and kill nearly 1,000 civilians each year. Police violence is gun violence, why would we give police more money in the name of gun control? Police reform and holding officers, like the Uvalde officers, accountable is integral to gun violence prevention. Watch exclusive footage obtained by the Austin-American Statesman of Uvalde law enforcement response here.

2. Abusive dating partners can regain the ability to purchase guns.

The Bipartisan Safer Communities Act closes the boyfriend loophole by expanding the current prohibition preventing convicted domestic abusers from buying or possessing guns to include not only those who have abused partners they’ve been married to, lived with or shared a child with, but also those who have abused their dating partners outside of those stipulations. Importantly, the Act includes a provision allowing dating partners convicted of misdemeanor domestic violence to have their gun rights restored if their record stays clean for five years. As of now, the five-year period only applies to dating partners who fall outside the spouse, parent, and cohabitant guidelines.

There is no reason behind this arbitrary five-year period, spouses and dating partners alike should have a lifetime firearm restriction. During negotiations, the NRA attempted to apply the five-year period to other domestic abusers, and fortunately, Democrats refused. But now that the door has been opened, what’s to stop future legislation from allowing all domestic abusers a second chance to own a deadly weapon?

3. Red states get funding no matter what.

The act includes $750 million meant to encourage states to create red flag laws. However, because Republicans insisted that money be available to all states, not just the ones that pass red flag laws, funding can be given to states that add mental health courts and drug courts. Conservative states that refuse to pass actual gun reform legislation, like Texas, will still receive federal funding. This hollow legislation will likely do nothing to change the current makeup of gun violence in America.

The question at the top of everyone’s minds is, given more time for implementation, would the Bipartisan Act have stopped the Highland Park gunman? The answer is a complicated maybe. Crimo passed his background check despite a violent history and bought his gun legally in a state with red flag laws. Through funding, the Bipartisan Act may improve Illinois’ red flag laws ensuring that young men like Crimo don’t slip through. But maybe isn’t good enough. In order to ensure a future free of gun violence, stricter gun safety legislation must be passed.

A majority of voters (59%) favor stricter gun reform laws. Will Americans have to wait another 30 years before we get common-sense gun safety legislation? Republicans and Democrats alike will try to placate us with this bipartisan act as proof that they did something, but victims and families of gun violence deserve more.