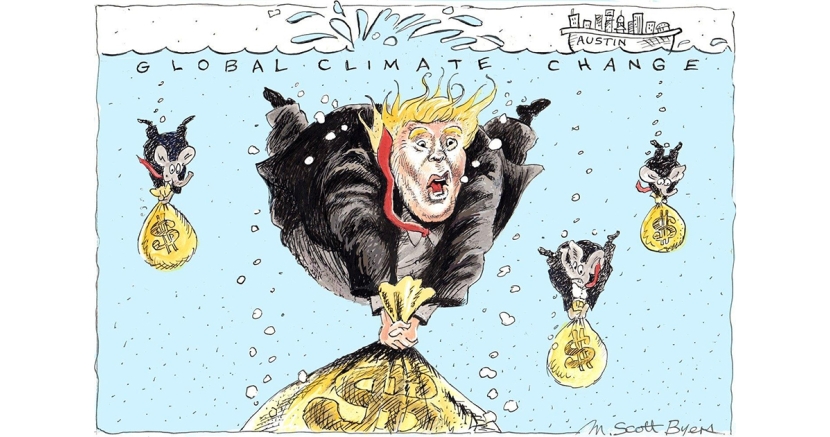 Illustration by M. Scott Byers
The climate crisis is not a secret to the scientists and engineers of the energy industry. That they and the politicians who serve them have done nothing to avert the calamity is, simply, a disgrace.

Global warming-induced drought in Guatemala has caused widespread famine and led many to flee in search of food for their families. In response, the Trump Administration has cut aid to Guatemala and other Central American countries, denied asylum to the starving and tried to build a wall to cage them in.

At the same time, President Donald Trump abandoned the Paris Climate Agreement and is accelerating the climate crisis further by eliminating protections and safeguards aimed at slowing global warming.

In other words, he’s trapped Central Americans in an oven while he turns the temperature to ever more dangerous degrees.

A review of the Austin City Council’s climate action plan and recent climate emergency declaration can’t be judged outside of this context — that is, the context of the global climate crisis that threatens the lives of tens of millions of human beings. Oh, and the very future of all life on the planet, too.

Back in 2015, Austin adopted its Community Climate Plan, which included 130 actions aimed at reducing greenhouse gas emissions from energy, transportation and other sources. The goal is net-zero emissions by 2050.

This year, City Council declared a climate emergency and called for “immediate and coordinated mobilization to address the causes and consequences of climate change.” When thinking of the consequences, consider the real-time deadly circumstances of our neighbors to the south.

Austin’s emergency declaration was the first from a U.S. southern city. One might have thought Houston would go first, as the Houston area has now suffered four 500-year floods in four years. Catastrophic weather events are becoming the norm.

Tropical Storm Imelda dropped torrential rain again on Southeast Texas, and the water had not receded when Republican U.S. Senator John Cornyn tweeted a link to an op-ed with the headline, “Environmental apocalypse predictions have failed for half a century.”

You know what’s really irksome? Like that rich kid in movie Titanic, Cornyn and other climate deniers will be knocking people out of the way to be first in the life boats when the time comes.

Those of us who grew up in Texas know that the energy companies are full of savvy folks. In many ways, prediction is the very heart of their business. Shell’s half-a-century old future scenarios program identified the dangers of global warming long ago. They knew it was coming, and predicted two possible global responses: a reasoned, responsible approach involving carbon taxes and development of green energy sources. The second Shell called “Scramble,” to which they should have added, “hits the fan.”

The climate crisis is not a secret to the scientists and engineers of the energy industry. That they and the politicians who serve them have done nothing to avert the calamity is, simply, a disgrace. History, if any historians survive, will condemn them.

Which brings us back to the Austin City Council. Many may feel like resolutions such as those passed by the council won’t do much to avert the crisis. But, whatever else it does, it also serves as an example of what responsible leaders do. And that may be key.

If their actions are followed by communities all over the nation, it would have a significant impact on our national politics, on the environment and on the future of the Earth.