Abbott Willing to Burn Down the House to Keep Himself Warm 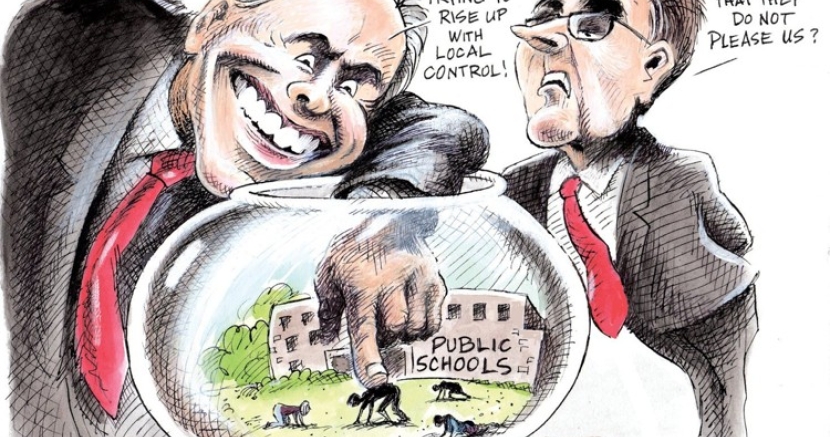 Image Credit
Illustration by M. Scott Byers
Glenn W. Smith
Did you ever try to put out a fire with a promise?

An East Texas hunting guide liked to tell the story about a couple of Piney Woods brothers who came home one winter night to discover their father had cut down part of their family home and chopped it up for firewood. “I was cold,” the old man said. “I only took out the south end.”

To see it clearly, we need to see the forest and the trees. Under Republican rule, the state has shoved onto local governments a good bit of the financial responsibility for things we need and care about, such as education, health services and traffic solutions.

"Look, we’re cutting taxes!” crow state Republican officeholders. On a second look, though, we discover they’ve weakened or cut down our hometown walls — and roads and flood levees and schools — in order to make the claim. Local governments then turn to raising property taxes to make up for state officials’ irresponsible actions. Woe unto local governments, say the smoke monsters of the GOP.

Now, Abbott wants to tell local officials they can’t raise the money to put out the fires. Specifically, he wants to arbitrarily prohibit cities, counties and school districts from collecting more than 2.5 percent in property tax revenue than was collected in the previous year.

Oh, Abbott has included some promises for the future: The state will stop some unfunded mandates and provide some additional pencils for public schools, he says.

Did you ever try to put out a fire with a promise?

The resurgent boom in oil prices helps hide some of the potential damage. The Texas economy is like an old 19th-century oil lamp: When oil prices are up, our economy burns brightly — so brightly it can sometime hide real fires. How much damage can Abbott really do while the oil surf is up? Plenty.

Decades of right-wing attacks on public investment of all sorts have too many believing that the investments only help the undeserving. It’s a kind of ghost-in-the-machine software humming in the minds of the poorly informed. “All our money is being spent on people we don’t like,” says the code.

It’s not true, of course. Believers tell themselves the lie while they are driving — or idled by traffic — on roads paid for with public investment, going to banks where their deposits are protected by programs paid for with public dollars, surfing the internet that was invented with public money, or cheering on our military and first responders who are paid with our tax dollars.

But the equation, “taxes equals benefits for other people, not us,” has been used for decades by greedy con artists trying to convince folks to oppose public investment altogether. Along the way, the con artists manage to demonize the imagined undeserving “others” while keeping most of the wealth for themselves.

There’s nothing new about people setting out to gain at the expense of others — only to find out sooner or later that they are the ones who will ultimately pay a price. The theme pretty much drives most of human storytelling, from the East Texas father noted above to the recent movie “There Will Be Blood.”

t seems we are often setting fires to our own homes when we light blazes against the darkness of imagined demons.

There are other ways to address alarmingly high property taxes. For instance, we could close loopholes that today let wealthy developers avoid paying their fair share of property taxes.

Tax codes are funny things, though. Too often, when we set out to reform them to make the wealthy pay their fair share, we find out it’s easier for the wealthy to find loopholes than it is for us to close them.

Let’s think constructively, not destructively. All of us want good schools, roads, health care, police and fire departments. Most of us are willing to pay our fair share for them. Let’s make tax fairness universal.