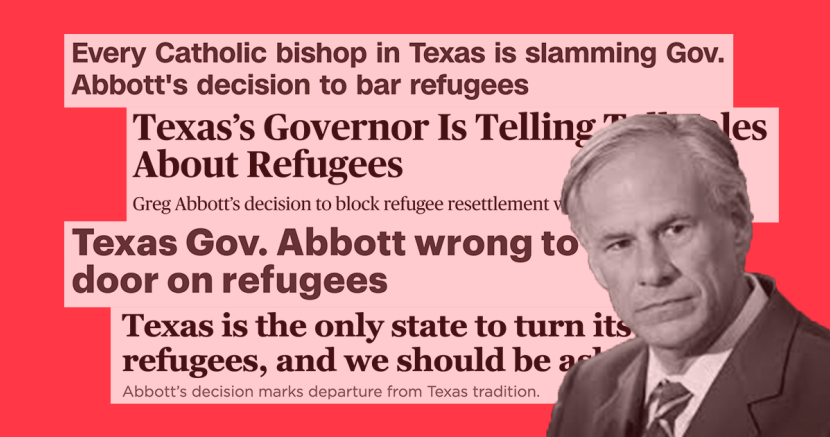 Abbott’s shameful refugee decision goes against what Texans stand for

Every Texan should be embarrassed and ashamed by Abbott’s decision not to accept new refugees into our state.

Update (1/16/20): A few days after Gov. Greg Abbott's refugee decision, a federal judge temporarily blocked the Trump administration's executive order that gives state and local officials the power to deny refugee admissions. This means that for the time being, new refugees will be allowed to resettle in Texas.

This past weekend, Gov. Greg Abbott made the heartless decision not to participate in the refugee resettlement program this fiscal year, making Texas the first state to reject resettlements under a new rule from the Trump administration.

Abbott’s decision forces our state to turn its back on those in need by barring new refugees from resettling in Texas.

You would think that with Abbott’s history, we'd no longer be surprised by this type of news. But with this decision, Abbott has reached a new low. Just take a look at the headlines in response to his decision:

Not only is Abbott facing backlash from his typical critics, but he is also the minority within his own party. In fact, his decision was so obviously wrong that Abbott, a noted Catholic, is being criticized by every Catholic bishop in the state.

But even without this backlash, any reasonable person with a heart should know that turning your back on those in need is immoral. And it goes against everything Texans stand for.

Texas has been a leader in resettlement for years and our state has large refugee populations in many of our major cities. Instead of taking pride in that fact, however, Abbott twisted it into a reason not to accept refugees.

In his letter to Secretary of State Mike Pompeo, Abbott says “Texas has carried more than its share in assisting the refugee resettlement process and appreciates that other states are available to help with these efforts.”

In other words, Abbott is saying, “We did our part. Now it’s someone else’s problem.”

Let’s be clear, Abbott’s reasoning is not that Texas lacks the resources to accommodate more refugees. Because we don’t. We could most certainly take in more refugees. Instead, his reasoning is that “we’ve done our fair share.” The selfishness and complete disregard for people’s lives displayed in that sentiment is staggering. It does not reflect Texans’ values and undermines all the hard work our state has done up to this point to become a leader on this issue.

So far, Texas has been the only state to reject resettlements under the new Trump rule. In fact, more than 40 other states, including 17 led by Republican governors, have agreed to continue resettling refugees.

Our state leaders should support welcoming people from all walks of life, and ensure we help those in need. But instead, Abbott is using refugees as political pawns to advance anti-immigrant policies and sentiments.

This feels like an important time to point out that people accepted as refugees by the U.S. are legal immigrants, by definition. So, while we’re all well aware of Abbott’s anti-immigrant stance toward the situation at the border, those feelings should have had no bearing on this decision.

He’s choosing to slam the door in the face of people who are fleeing violence from all over the world. And it’s no exaggeration to say that Abbott’s decision will lead to more innocent people dying.

Every Texan should be embarrassed and ashamed by Abbott’s bigotry and hatred. We must elect compassionate leaders to state office in the future and continue to hold Abbott accountable until we get the chance to replace him in 2022.

In the meantime, let’s fill the Texas Senate, the Texas House, and other elected positions with progressives who will give Abbott hell until that time comes.