5 things to know about Texas’ new secretary of state 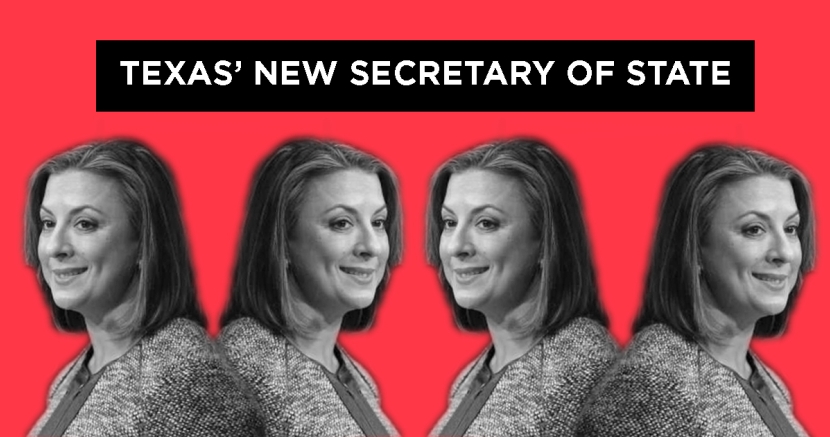 Wesley Story
We should be wary of any secretary of state appointed by Gov. Greg Abbott.

After his former nominee failed to get confirmed during the 2019 Texas Legislative session, Gov. Greg Abbott has appointed a new secretary of state: Ruth Ruggero Hughs.

Though the infamous vote suppressor David Whitley is gone, we are still wary of any replacement appointed by Abbott.

Here are five things you need to know about Texas’ new acting secretary of state:

1. Hughs has a track record of putting corporate interests before people.

During her time as the Texas Workforce Commission chair, Hughs was plagued by her own scandals. Emails obtained from the Texas Observer show Hughs had been secretly coordinating for more than a year with tech lobbyists to rewrite legislation. Even as more details came out about these dealings, Hughs was less than transparent about her actions.

Before that, Hughs worked for Abbott during his time as Texas Attorney General. Hughs defended state agencies from civil rights and employment lawsuits, and was eventually put in charge of Abbott’s civil litigation department.

2. As secretary of state, Hughs is in charge of Texas’ elections.

The Texas Secretary of State is charged with overseeing the state’s elections, among other duties, and is the top election official in our state. Hughs will also have the difficult job of restoring the public’s trust after former attacks on voting rights from Texas lawmakers and election officials.

You would think such an important job would require a confirmation of some sort before Hughs was able to take on these duties. Unfortunately, you’d be wrong.

3. Hughs is not actually the confirmed secretary of state yet.

Abbott’s former nominee for secretary of state, David Whitley, waited until the last day of the 2019 legislative session to retire. This allowed Abbott to pick his replacement without needing a confirmation vote from the Texas Senate.

The Texas Senate will be unable to vet and confirm Hughs until lawmakers return to the Capitol in 2021. In the meantime, she’ll remain Texas’ acting secretary of state.

4. Hughs’ predecessor tried to suppress the votes of thousands of Texans.

It may seem unfair to judge Hughs based on the actions of her predecessor, but there is a common denominator between the two: Abbott. This brings us to our last point.

Considering Abbott’s track record with his former appointments, this is an immediate red flag. Abbott is the real puppet master behind these continued attacks on voting rights and Whitley just so happened to be the catalyst through which Abbott accomplished his goals.

We know that any appointment to secretary of state made by Abbott must be met with fierce scrutiny. If we don’t remain vigilant, Hughs will become Abbott’s newest puppet in his voter suppression show.

Just as we held David Whitley accountable for his voter suppression efforts, we will continue to hold Ruth Ruggero Hughs accountable.

All Texans deserve free and fair elections and we need a secretary of state who fights to make that happen.