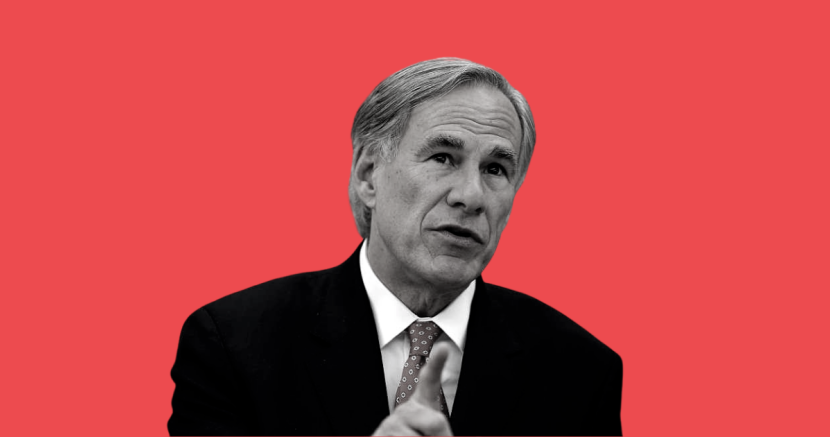 Victoria Guerrero
Tens of thousands of Texans have died from COVID-19 under Gov. Greg Abbott's watch.

Gov. Greg Abbott took the 38th anniversary of Roe v. Wade as an opportunity to express his anti-abortion rhetoric masked as concern for the lives of Texans, even stating his “committment to fostering a culture of life here in Texas.” Yet, his history of cruel  policies and inaction has shown that the governor simply doesn’t care about protecting Texans’s lives and health. He is only committed to restricting abortion access.

Here are 5 ways Abbott has proven he isn’t pro-life, he is simply anti-abortion:

1. Abbott refused Medicaid expansion, even in a fatal pandemic

Texas has consistently ranked highest in the nation for the number of uninsured people, and the consequences of that statistic were dire as the COVID-19 pandemic ravaged our state. Yet Abbott did nothing to ensure Texans had access to potentially life-saving treatment. In fact, he outwardly refused to expand Medicaid, which would have allowed more than 1.5 million Texans to become eligible for health insurance.

A study from 2019 estimated that 730 Texans die a year because Texas refuses to expand Medicaid, and that number must be far higher in 2020. Because Abbott and his predecessors have continually refused Medicaid expansion, it is estimated that the state has lost over 100 billion dollars in federal funds that could have gone to low-income Texans seeking healthcare.

According to the 2018 Kids Count Data book, which uses statistics to rank states in four areas of child well-being: health, education, economic well-being, and family and community, Texas ranked 43rd overall. In its individual categories Texas ranked 41st in health, 47th in family and community conditions, 35th in economic well-being, and 32nd in education. And in the state foster care system, reports have shown that the state was placing children in foster homes where they were “often abused, sexually assaulted, subjected to physical restraints, missed by the state’s oversight efforts, or even killed.”

Governor Abbot’s claims to lead a “culture of life” don’t translate to children who are already born or are in the Texas foster care system.

3. Texas has the 13th highest maternal mortality rate in the nation, and Abbott accused people of lying about it

In Texas, there 14.6 deaths per 100,000 live births in the entire state, and the rate is even higher for Black women, which was reported to be 27.8 per 100,000 live births in 2019. The data was originally told to be higher than it actually was, due to faulty data acquired by the state of Texas, but Abbott accused people of deliberately lying about the states statistics instead of mentioning the states inaccurate reporting of the maternal mortality rate.

Following the mass shootings in El Paso and Odessa/Midland, which took the lives of 29 Texans and injured more than 46, Abbott refused to pass any comprehensive gun safety or reform laws. His fears of losing voters in his extremist base overcome any concerns he might have had for the lives and safety of Texans. This year, the governor has gone so far as to say that he wants the state to become a “second amendment sanctuary” in order to protect the state from federal gun rights regulations.

His refusal to combat gun violence has helped contribute to the loss of Texans' lives, and his inaction opens the opportunity of more deaths in the coming years if Texas does in fact become a gun sanctuary state as he intends.

5. Abbot’s botched the state's COVID response at every step

One of the darkest periods of Abbott’s time in office has to be his response to the COVID-19 pandemic. In a state with access to some of the best medical centers in the nation, 1,898,549  million people have contracted COVID-19 and more than 37,000 have died from it, which is 12 times more than the deaths that occurred from 9/11.

Abbott's failure to provide adequate testing and PPE across the state led the way for hospitals and funeral homes to be overwhelmed and operating beyond their capacity. His failure to provide rent relief led many Texans who were already facing high unemployment rates to experience housing instability during the pandemic. His refusal to order effective and enforceable closures on public places while cases continued to surge, and his decision to re-open non-essential businesses like bars and restaurants, led to many Texans being forced to return to work in order to survive, while also potentially exposing them to a life-threatening virus. Whether Abbott believes it or not, those deaths were, in part, a result of his actions or lack thereof.

Abbott should be mourning all the lives lost as a result of his negligence and inaction. Contrary to Abbott’s anti-abortion rhetoric, abortion is essential health care and saves lives. Having access to abortion strengthens communities and offers vital health care to Texans who need it.