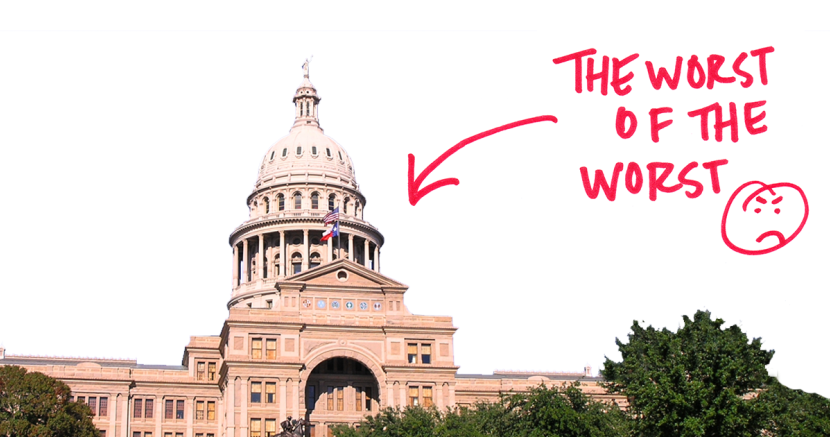 The Worst of the Worst Texas Legislative Session in Pictures, Annotated

This session was pretty awful and by most accounts, the worst in recent history

This session was pretty awful and by most accounts, the worst in recent history. Though our progressive champions in the legislature fought the good fight, backwards and discriminatory policies and the terrible lawmakers behind them ruled the day, because, in the end, the “Pink Dome” is under single party rule — Republicans hold a majority in both the House and Senate, with Republican Speaker Joe Straus in charge of the House, scarily extreme Trump wannabe Lt. Gov. Dan Patrick in charge of the Senate, and absentee Governor Greg Abbott charged with setting emergency priorities.

Taking their cue from Trump in the White House, this session Texas Republicans prioritized otherizing and oppressing marginalized communities and restricting the rights of a growing majority of Texans whose interests and values they couldn’t possibly represent.

A priority for Governor Abbott, Senate Bill 4 was fast-tracked through the legislature and signed into law well before the end of session. Legal challenges — and a swelling resistance — to the racist, anti-immigrant “show me your papers” law haven’t missed a beat. Of the more than 35 anti-abortion restrictions Republicans proposed this session, a handful made it through into law as Senate Bill 8 — a cruel bill that, among other things, forces burial or cremation of embryonic and fetal tissue and effectively bans abortion after 13 weeks by banning the safest procedure for the woman. While Dan Patrick’s threat of a special session over the so-called “bathroom bill” still looms, Republicans accomplished their discriminatory goals by passing “religious refusal” measures. The most insidious of these measures, House Bill 3859, targets kids and families in the state’s broken child protective system. Perhaps to prove that their ultimate goal is to deny Texans of anything good, Senate Republicans killed a bipartisan bill aimed at fixing our broken school finance system by sneaking a wildly unpopular vouchers amendment onto it. If you haven't seen it yet, make sure to check out our wrap-up video showing how progressives from around the state and our champions in the legislature fought hard this session.

Help us continue the resistance! Your donation helps us fight the right and expose these guys.