In workplace safety, greed is the Grim Reaper 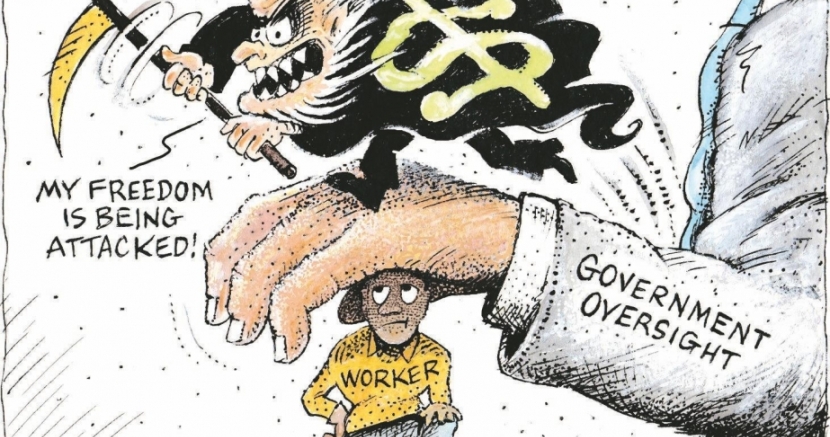 Glenn W. Smith
Republicans have been slow to protect workers during the COVID-19 pandemic, leading to thousands of unnecessary deaths.

There was a time not so long ago when young American women could be locked in tall buildings behind sweatshop doors so they couldn’t take breaks from their sewing machines. In 1911, such unsafe practices of greedy industrialists killed 145 workers when fire broke out in New York’s Triangle Shirtwaist Factory.

The archives of The Factory Inspector, the early 20th century journal of the International Association of Factory Inspectors, give other evidence of workplace danger. There we would learn of one worker cut into small pieces by the machinery of the Philadelphia Caramel Works.

Back in the 19th and early 20th centuries, work was so unsafe and deadly accidents so frequent that two unrelated men with the same name working in different cities died in the same hour when their clothes were caught in rotating shafting.

Despite the efforts of organized labor and progressives, American workplaces remained killing fields for decades. In 1970, 14,000 Americans were killed on the job. The creation of the federal Occupational Health and Safety Administration and the Mine Safety and Health Administration in the 1970s helped reduce workplace deaths.

Our current circumstances are also revealing. The Trump administration and their Republican allies in the states have been slow to protect workers during the COVID-19 pandemic. Their minimalist approach has led to thousands of unnecessary deaths, including the deaths of “essential workers” and frontline health workers.

Their motivations were the same as the motivations of early industrialists: Profits were far more important than the lives of easily replaceable workers. Greed is the Grim Reaper.

Throughout the 20th century there were advances in worker welfare. Congress regulated child labor in 1938, although agriculture was exempted (approximately 500,000 children pick a quarter of our food today). Minimum wage laws were established.

There are now reports that the Trump administration is considering a “herd immunity” strategy with regard to the pandemic. The macabre term, herd immunity, was coined a century ago. Its use today reveals the actual value many on the right assign individual human life. It’s hard to see the individual within the herd.

This strategy would lift many if not all restrictions to allow people to socialize freely, rapidly spreading disease and death but also, the theory goes, promoting immunity in larger percentages of the population.

What is the difference between this planned sacrifice of human life for profit and the greed-soaked practices of American coal mining companies’ cheap “room and pillar” methods that killed thousands of miners?

There are many, many American employers who value the lives of their workers and their workers’ families. If only those who don’t would look to them as models.

Opponents see government safety oversight and regulation as an attack on freedom. How can it be so hard for them to see that the dead aren’t free and neither are those forcibly put at risk of death so that the profits of others grow?

Trump’s cynical “law and order” campaign spin speaks of keeping Americans safe from violence in the streets. Government should also keep us safe from exploitative violence in the workplace. In the time of the pandemic, this responsibility of government is great.