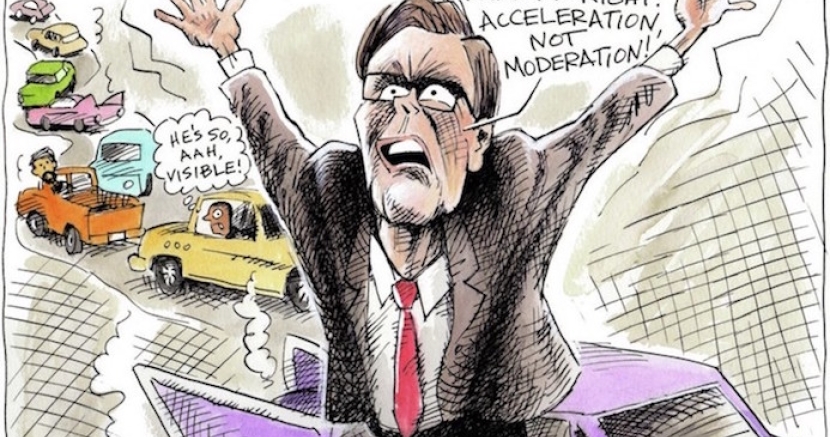 Will Legislature be All Engine Noise and No Action?

Pedal to metal or slow ride, this session will be a wreck

Ed. note: the following column was originally published in the Austin American-Statesman.

Image is an original illustration by artist M. Scott Byers.

Analyzing the 2017 session of the Texas Legislature is a little like predicting the havoc of one of those old automobile destruction derbies. What will happen when the ghosts of the reactionary past try to run over those who are hopeful for a fair shot at a prosperous future?
It won’t be pretty. It’ll be so loud our ears will hurt and we’ll choke on the exhaust fumes. Drivers of the radical right have more cars, so the odds are stacked against those hopeful drivers likely to be trapped in the wreckage. Keep the Jaws of Life handy.
Then again, maybe that won’t be necessary. Republicans may be thinking that President Donald Trump is so bad that this is a good time to take their feet off their accelerators and hide behind their tinted windows.
It may be there’s a lot of furious noise but very little actual movement.
What, you ask, about the pedal-to-the-metal race in the Republican-led Congress to repeal the Affordable Care Act and other “do-it-before-the-people-notice” plans? Word around the country is that many Republican voters are waking up to the fact that ACA repeal threatens their own access to health care.
If you’re a Republican, even a red-state Republican, you are facing Trump and the likelihood that your party is about to take health insurance away from millions of people. This might lead you to try and temporarily lower your profile.
The GOP dilemma is further complicated by the potential consequences of some of the policy proposals on the table; Lt. Gov. Dan Patrick’s list of legislative priorities, for instance.
While public schools continue to suffer from cuts in state funding, Patrick wants to pass a state law placing an arbitrary limit on a school district’s ability to raise taxes to make up the difference. His property tax plan is, more or less, a California-style Proposition 13, a measure that destroyed California schools for decades.
The same proposal, of course, would diminish local government’s ability to cope with exploding population growth. We can’t forget that the state’s refusal to accept billions in federal dollars for Medicaid left local hospitals in financial difficulties. Now the state wants to limit what they can raise locally.
Then there’s Patrick’s taxpayer-money-for-private-school plan, which many Republicans and most Democrats rightly oppose. The plan all but abandons a commitment to universal public education, though Patrick will probably agree to keep enough public schools open to name a couple after John Birch or Lester Maddox.
And get this. For years Patrick and his allies have been invading the privacy of women by standing between them and their doctors. Patrick is a former sports bar owner who thinks he knows women’s health better than women or their physicians.
Now, however, Patrick has a proposal called the Women’s Privacy Act. Great Scott, has he changed his mind? Does he believe women and their doctors are capable of making health care decisions after all? No. The “Women’s Privacy Act” is Patrick’s name for a bathroom bill aimed at discriminating against transgender kids.
Some will remember the days of segregation and the “Whites Only” signs on many public restrooms. Patrick’s bill begs a question: who in hell is going to inspect people to see if they are in the “right” bathroom?
Imagine an Oklahoma Sooner fan in the women’s restroom on the UT campus. A Longhorn enters. Having a little sport, the Sooner fan points at the Longhorn fan and shouts, “She’s a man! She’s a man!”
Are the police then going to check out the allegation? Under Patrick’s bill, the accused patron commits no crime, no matter the facts. But the university might. So, who’s going to look?
The point is that some Republicans are probably figuring that discretion is the better part of re-election. Sure, they’ve got to rev their engines to keep their base excited, but little boys learn to make that motor noise at an early age, so that’s no problem.
It may be that Texas GOP legislators are less like the driver and more like the worn-out old car-chasing dog who, while wishing we’d come up with a new simile, has once again caught the bumper. What do they do with it now?
Tags:
TX Lege 17

Certified Progressive 2020: Our list of Texas progressives running in flippable districts
18 hours ago

As 'Roe' hangs in the balance, Texas must elect more women
1 week ago