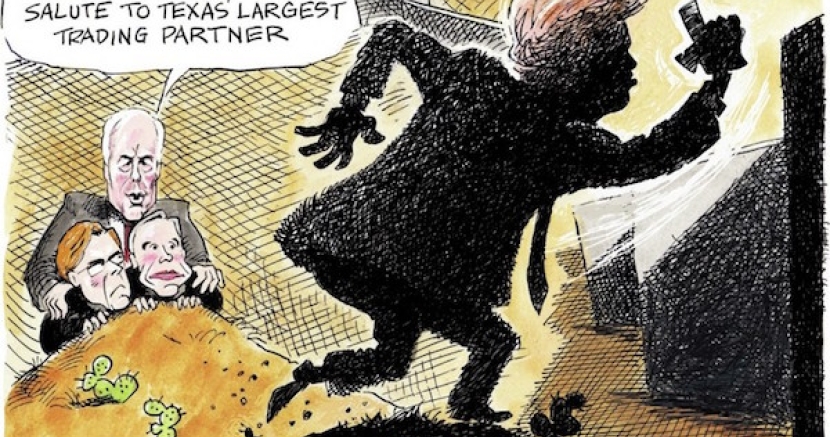 Back in 2014, then-Attorney General and gubernatorial candidate Greg Abbott said he was “deeply concerned” that the federal government believes it has the authority “to swoop in and take land that has been owned and cultivated by Texas landowners for generations.”

Then-Gov. Rick Perry said, “If this country’s to stay the land of freedom and liberty, private-property rights must be respected.”

Any administration, Mr. Patrick? Not quite.

All of the above quotes were about a complicated dispute involving federal and private land along the Red River in North Texas. Now that President Donald Trump is planning to take private property from Texans to build his border wall, Abbott, Patrick and Perry — who is now Trump’s Energy Secretary — seem to have put their “Come and Take It” flags away.

In his new budget, Trump included money for the Justice Department to hire a team of 20 lawyers to take private property Trump needs for his border wall. As Business Insider reported earlier this month, Texans who own property along the Rio Grande River have been receiving “Declaration of Taking” letters from the Department of Homeland Security.

To make his wall seem more wall-like — that is, to extend it along more of the 1,900-mile U.S.-Mexico border — Trump is also talking about building it along the border through Big Bend National Park, Big Bend Ranch State Park and the Black Gap Wildlife Management Area.

Those who are familiar with the Big Bend area can only wish Trump himself would, with his own two hands, try to build the wall through that dangerous, rugged country. Trump is not Teddy Roosevelt — and Big Bend is not Mar-a-Lago. It’d be kind of like watching city girl Eva Gabor in the 1960s TV hit “Green Acres” — except the Green Acres farm was not a harsh landscape that took savvy to endure.

Everyone with knowledge of Texas’ 1,200-mile border with Mexico knows that Trump’s $21 billion wall is a ridiculous idea that will have little impact on Mexico-to-U.S. migration. They also know it will hurt the Texas economy. Combined with Trump’s talk of a border tax and his trade-jeopardizing, anti-Mexico table-thumping, the economic consequences of Trumpism could be severe.

Trump means the wall as a symbol — a middle finger to the peoples south of the United States and a confirming sign of his ethno-nationalism to his more bigoted followers at home. The ugly power of Trump’s wall is already in his words. He doesn’t need a real wall to make his point. So, let’s save $21 billion and prevent real damage to the Texas and national economies by not building it.

The timidity of Abbott, Patrick, and Perry in the face of Trump’s anti-Texas plans is striking. Afraid of alienating Trump’s Texas voters, they are supportive of the wall even as Trump threatens to take Texans’ land and hurt our economy.

Credit to U.S. Sen. John Cornyn for speaking out against the wall. Cornyn has been one of the Senate’s great followers in recent years, though at least on this issue he’s shown some leadership. It’s probable that most of his fellow Republicans agree with him in private; there just isn’t any argument for the wall beyond its appalling political message.

Does anyone really want to be known by history as the generation that built a wall between us and Mexico, a generation who apparently had its pants scared off by people who seek only the opportunity we already enjoy?

The raising of walls is not usually attended by the kind of celebrations that often mark their fall. Walls are built out of fear, their builders hiding or withdrawing from imagined dangers abroad. There’s no record of parties on Hadrian’s Wall or the Great Wall of China.

There was a party when the Berlin Wall came tumbling down.