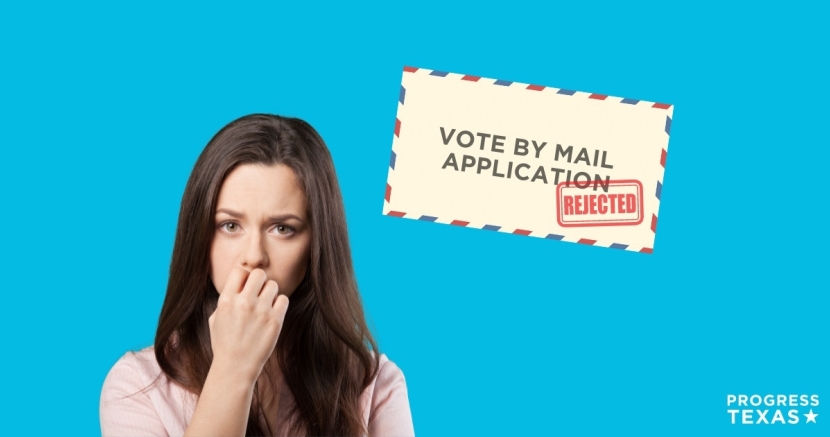 Ed Espinoza
And why counties won’t tell voters if they’ve been rejected.

The new Texas voter law is already causing problems - or is working out just as intended, depending on which side of the aisle you’re on.

Vote-by-mail applications are being rejected at a massive scale across the state. In Denton and Tarrant counties, rejecting rates of 40% and higher have been reported, 50% have been rejected in Travis County, and Harris County has nearly seven times more rejections than previous elections.

It’s all due to a suite of Republican voter laws passed by the legislature in 2021 - these are the laws that Democrats were trying to stop when they broke quorum last year. And there are several problems at play here.

Do you recall which ID you used to register to vote?

If you’re not sure, you’re not alone - because this is just one of the problems plaguing vote-by-mail applicants right now.

If a Texan registered to vote using the last four digits of their social security number, but applied for a vote-by-mail application using their driver’s license number, then the numbers don’t align and - according to the new law - the request must be denied. County officials may not even be allowed to inform the voter of the rejection, because it could be seen as promoting voting by mail which is now against the law for Texas public officials.

Listen: The Progress Texas team chats about voter suppression on this week’s podcast

And while the state has passed a new law, it has not distributed new forms. According to CBS in Dallas, old vote-by-mail forms are widely available at libraries, post offices, and government offices - but those forms do not request ID numbers. As such, the strict voter law requires that any application submitted on one of these old forms must be rejected. County Commissioner Heider Garcia of Tarrant County stated, “people are confused.”

So when will the state distribute new forms? Turns out that’s a problem, too. The Republican Secretary of State claims that supply chain problems are preventing the state of Texas from printing new forms.

Right, make sure to remember that when you get bombarded with campaign mail this year.

The new law may prohibit counties from contacting affected voters

According to Travis County Clerk Dana DeBeauvoir, the new law is so strict that county officials are hesitant to act due to a threat of jail time. As she told CBS Austin:

"If I do anything else to promote vote-by-mail, I am engaging in a state jail felony. The broad interpretation of that is if I help them fill out a ballot-by-mail application, then I am promoting ballot-by-mail, and that is where we get in trouble with the law. It's too broad, too vague, and not helpful for voters, and I would like to help voters a lot more than the current interpretation of the law allows," DeBeauvoir said. "I am hamstrung. A state jail felony is nothing to thumb your nose at. You know I would have preferred to tell voters exactly what to do, but I think under the circumstances, we're going to have to rely on the community and the parties to solve this problem the legislature created.”

What to do if you think your application has been rejected