When Will Texas Finally Outsmart Its Transportation Trolls? 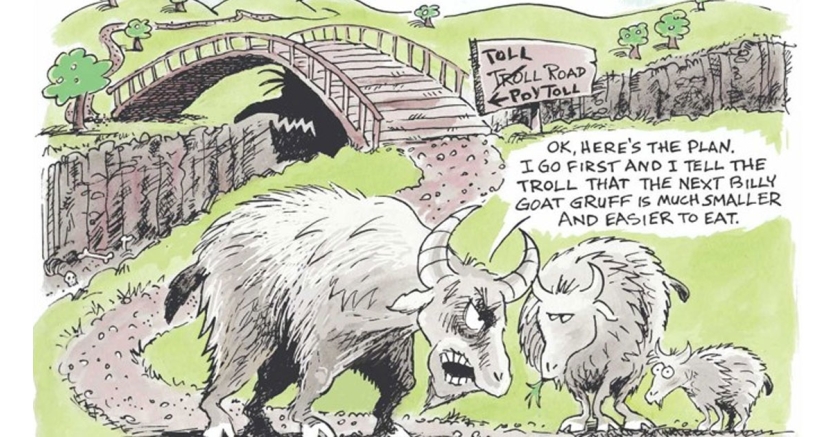 Image Credit
Illustration by M. Scott Byers
Glenn W. Smith
The leadership in Texas and the nation is paralyzed, afraid to raise taxes to build the necessary transportation infrastructure.

Looking at our transportation woes, how can there be any humans left who still believe themselves at the top of the animal kingdom?

Ants seem to march along their chosen ways with ease and without argument. The gently trod paths of whitetail deer emerge from the wood without controversy. Even cats and dogs in the same crowded house keep to their own lanes.

Not us. If we were ants or deer, we’d have starved already from our gridlocked immobility. With apologies to Robert Frost, there are no longer any roads not taken.

The leadership in Texas and the nation is paralyzed, afraid to raise taxes to build the necessary transportation infrastructure. Do they believe their tenure is somehow more important than the time it takes your ambulance to get through traffic to the emergency room?

It’s greed, self-interest and great failures of will and imagine that, as Frost might say, “has made all the difference.” It’s not a pretty difference.

It may not be just the ants and deer looking down on us with pity. We can be pretty sure that if visitors from elsewhere in the galaxy happened by, they’d look at our planet’s transportation choices and think, “Not much reason to stop here. What could possibly be interesting in this backwater of the universe?”

Really, how and why did we decide to stick each of us in little enclosed metal cages with wheels, isolating each of us from the other, killing many because of the difficulties of operation, gulping down the Earth’s energy resources with abandon, poisoning the air, trapping us for weeks and months of our time — do the math! — in traffic jams?

Someone out there is immediately going to shout, “What about freedom?” and point to the magic of “the open road.” What open road?

Some years ago, Texas turned to toll roads as a solution. Hey, if people have to get from here to there, make ‘em pay! Forget that they’d already paid taxes to build roads that were supposed to get them there already.

Now, Texas has more toll roads or managed lanes than any other state. Twenty-seven to be exact.

Some on the right believe that by “managed lanes,” the leadership means they’ve “managed” to dig deeper into their pockets than they should. They are fighting against more, uh, toll management.

Predictably, Gov. Greg Abbott, who is so busy looking backward to protect his right flank that he’s unable to actually move the state forward, is now against toll roads.

So, from our leaders it’s “No” to toll roads. It’s “No” to increases in the gasoline tax to pay for necessary free roads. And, many conservatives hate even thoughts of high speed rail or commuter trains, probably because they work.

Maybe they think increased mobility among the people is like better education. With both, they may be smart enough to see through political frauds and get to the halls of power to do something about them.

It seems a long time ago then-Gov. Rick Perry proposed his “Trans-Texas Corridor,” an ambitious, 4,000-mile system of highways and tollways that fell apart under criticism from the right that it was really part a conspiracy between Canada and Mexico, who secretly planned to merge and then strangle the United States economically.

Maybe the Russians made that up, just like they did the Jade Helm conspiracy theory a few years back. They spread internet stories that federal military exercises near Bastrop were preliminaries to the armed U.S. invasion of Texas. Really. That happened. Abbott and many others fell for it, too.

Almost forgot. The debt payments on the toll roads that were built under Perry’s plan now inhibit new spending on new roads. Clearly, the road does not go on forever.

Specifically, can we be as wily as the Three Billy Goats Gruff? After all, they outsmarted the troll under the bridge who threatened to halt their commutes.

Remember that story? It comes from Norway, the happiest country on Earth, probably because they’ve tossed all their trolls from public office.