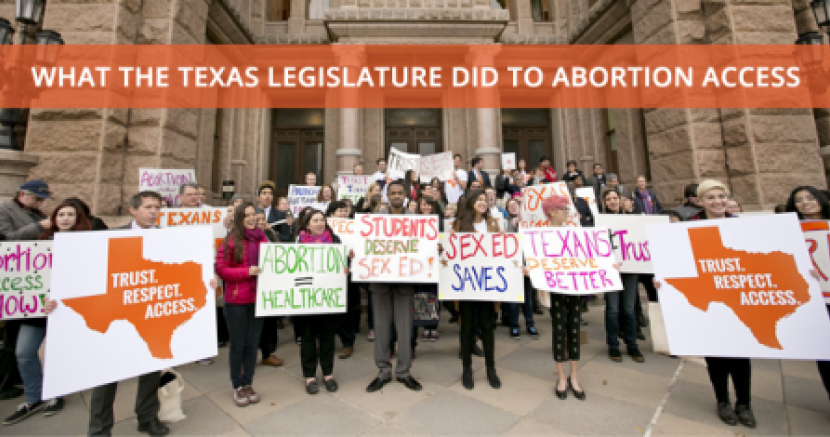 Two years after passing one of the most restrictive anti-abortion laws in the country, Republicans came back to the Texas Capitol this legislative session with the goal of restricting access to abortion care even further, proposing dozens of laws that would undercut access. Though Democratic lawmakers were able to defeat all but one of these bills, several anti-abortion measures advanced to floor votes and others targeting access to reproductive health care services were legislated into the state’s budget.

Though two harmful proposals that came dangerously close to passing—one that would have banned insurance coverage of abortion and another that would have forced families to carry to term wanted by nonviable pregnancies against the advice of doctors—were prevented from becoming law, so were other proactive proposals that would have restored respect for health care professionals, expanded access to birth control, and stopped politicians from interfering in Texans’ deeply personal medical decisions.

Under Texas current law, when an abused, abandoned, or neglected teen doesn't have a parent they can turn to for consent, they can go to court to get authorization for an abortion from a judge. HB 3994 will drastically change this rarely used, judicial bypass process, a crucial safety net that has worked well to protect the interests of Texas’ most vulnerable teens for the last 15 years. Described by legal experts as “rife with constitutional problems,” HB 3994 is designed to put this process out of reach and further endanger the lives of teens living in desperate circumstances.

Just as Texas lawmakers cut programs that leave thousands of Texans without access to cancer screenings, birth control, HIV tests, and other preventive care, they have increased funding to dangerously manipulative—unregulated and unlicensed—“crisis pregnancy centers,” or CPCs. According to a 2012 Texas Observer investigation, CPCs deliver fewer services to women, while spending more per client than family planning providers. An investigation into CPCs by NARAL Pro-Choice Texas found these faux medical clinics use deceptive tactics, medical misinformation, and flat out lies to dissuade people with unintended pregnancies from accessing abortion services.