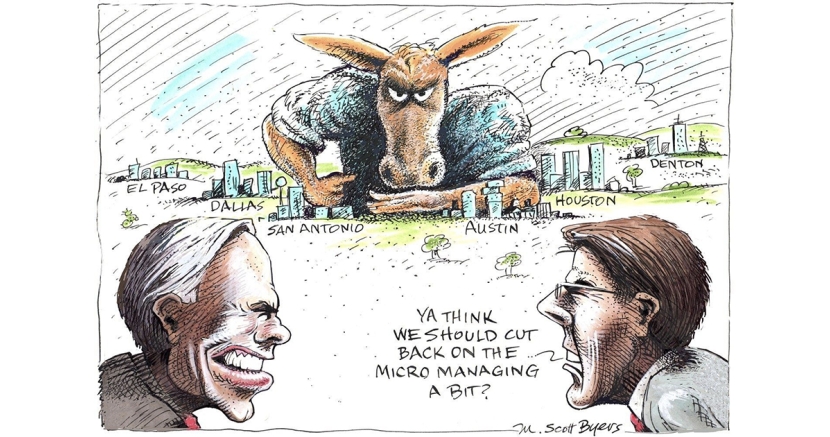 Illustration by M. Scott Byers
Republicans seem to think they can manage local governments better than local voters do, but they are deceiving themselves.

The Kurds “are not angels,” Trump said as he betrayed them recently by allowing Turkey to drive them from their homeland. According to Abbott, Austin officials aren’t angels, either. They have a “policy of lawlessness,” the governor said.

Abbott is not the only Republican official targeting Texas’ local governments. Texas House Speaker Dennis Bonnen was caught on tape saying he had a goal to make the 2019 legislative session “the worst session in the history of the legislature for cities and counties.”

We’re lucky none of our metropolitan areas share a border with Turkey.

On a variety of issues such as safety protections for ridehailing customers, Abbott and GOP state legislators have moved to override local preferences pre-empt locally approved ordinances.

Recently, Abbott announced that the state will full take control of $4.3 billion in federal Hurricane Harvey recovery funds instead of allowing local officials to manage the funds.

This is an attack on local government Abbott might one day regret. It will, of course, allow Abbott and other state officials an opportunity to hand out money to their preferred contributors, I mean contractors. So, there’s that.

But it also creates a new bureaucratic procedure to manage the flood mitigation spending. When the next hurricane hits, Republicans are going to wish they’d been more flexible because they will have earned the blame for flood damage that could have been prevented had they not put their political interests ahead of flood control.

One reason all these urban/suburban voters have turned to Democrats is Republican mismanagement of critical services. For instance, the state’s child protective and foster care system, dangerously mismanaged, is under federal court order. Children died because of the mismanagement.

Even GOP lawmakers were angered this year to discover the Texas Attorney General’s office spent $365.7 million for a new computer system that went unfinished.

Houstonians might remember that when needed flood control improvements go unfinished and they are once again forced onto their roofs when the floodwaters rise.

Republicans seem to think they can manage local governments better than local voters do, but looking at their bungling of state responsibilities — Texas still leads the nation in uninsured people — they are deceiving themselves.

No matter what Republicans might wish or claim, voters in urban/suburban Texas are voting for Democrats because Democrats are taking care of local needs in ways voters approve of. Are Republicans so disconnected from the real world that they don’t see that?

A cease-fire is in order in the state’s ongoing assault on urban and suburban areas. It might be fun for Republicans to beat up on local Democratic officials, but the schoolyard antics do nothing but generate ill will and wasted time and money.

Fixing potholes is a lot harder than cutting ribbons, and a Texas governor ought to keep that in mind.