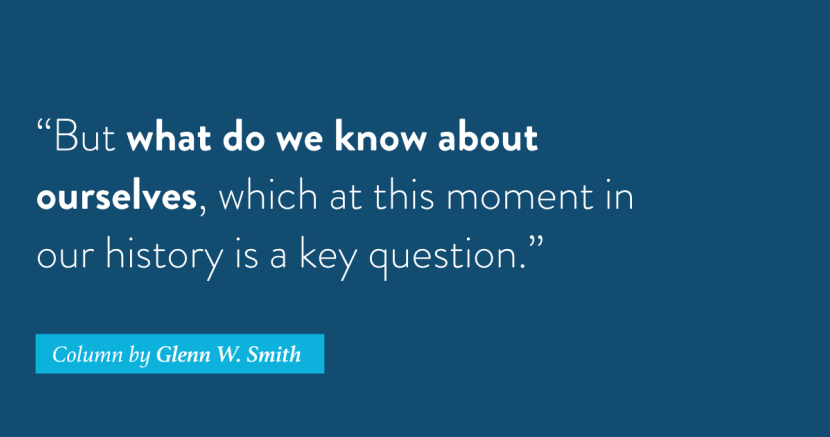 We know who Trump is, but Who are we?

We consider ourselves politically engaged. We pay attention, keep up with current events, talk often with friends and colleagues about matters political. Still, how often do we take refuge in the illusion that the troubles we see are all caused by others?

“What could the voters be thinking?” we ask. “What are they doing?” Don’t they see what we see, can’t they hear the emergency political sirens? If only all these other people would get their heads screwed on straight, we say with some exasperation.

Yeah, well, the decisions before us as citizens in a democracy are more about who we are than who Donald Trump is. We know Trump. Trump is the massively insecure sixth grader who failed nearly every column of that “Traits, Attitudes, and Habits” section of our elementary school report cards.

Remember that scorecard of conduct? Disciplines Himself. Is Courteous. Works and Plays Well With Others. Follows Directions Intelligently. Participates Well in Class Activities. On Trump’s report card, the teacher simply wrote HA HA HA HA over that section to indicate there was no other way to measure the depth of his character failure.

Unfortunately, Trump is a Republican President and other Republicans are emulating his behavior. Trump is what the teacher called a “bad influence.” Gov. Greg Abbott, Lt. Gov. Dan Patrick, Attorney General Ken Paxton and others in the GOP see the attention Trump gets on the playground and do what they can to act like him.

It’s most obvious in their bullying of kids they think are littler than they are, kids they can beat up, kids they know some of the other mean kids want to see beaten up. It’s a gruesome game, but it’s not unfamiliar to most of us from our grade school days.

Okay, we know all that. But what do we know about ourselves, which at this moment in our history is a key question.

Anyone out there been in any conversation with friends, colleagues or family members that were marked by remorse about recent political decisions or actions? Is there any self-examination going on, like, “Gosh, was I ever wrong about Trump. I just couldn’t bring myself to vote for Hillary Clinton, but now I see Trump is destroying America.” Anyone heard anything like that?

I doubt it. Most of the time we find ways of blaming all those other people for our political woes, whatever woes we notice, anyway.

In this we are like the kids who stand idly by as the bullies do their work. Or, we shamefully befriend the bullies so we don’t get beat up. Maybe we hope that if the bullies steal two or three children’s lunches we can get one of them. That is how the appropriations process works these days in today’s government, it seems.

Then, when the reckoning comes, we point to the behaviors of all those other people. We have mastered the art of being in our democracy but not of our democracy. And, if we don’t change our ways, we won’t have a democracy to be in anymore.

What’s that famous saying from the old “Pogo” comic-strip? “We have met the enemy and he is us.” Incidentally, that phrase was not original to Walt Kelly, writer of Pogo. It first appeared on a poster for Earth Day, 1970. As is evident from the Earth’s current condition, we are still the enemy, 48 years later.

Will we be disciplined citizens of a democracy and let our voices be heard in the streets and at the ballot box? Will we respond promptly and willingly to the issues of the day? Will we demonstrate responsibility for ourselves and others? Are we attentive to today’s dangers? Will we participate well in class, I mean democracy’s, activities?