Was Legislative Session a Success? 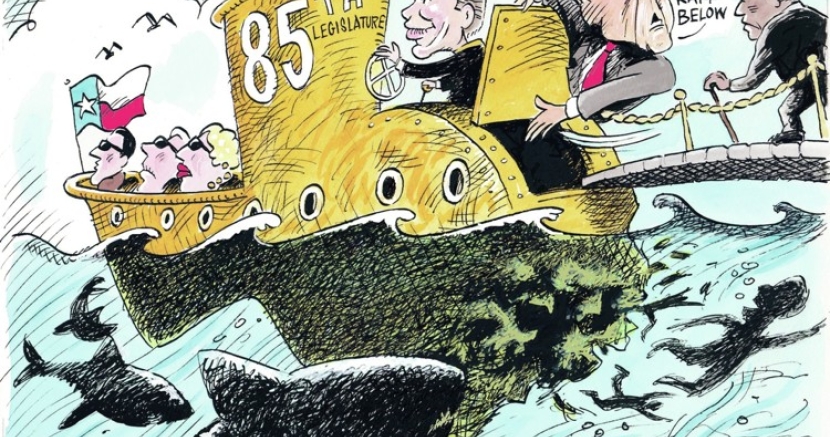 Glenn W. Smith
GOP leaders showed they were eager to be hurtful.

Let’s look on the bright side: Texas Republicans didn’t slash funding for public education so deeply that 20 percent of the annual school days had to be scrapped, which is what Oklahoma Republicans have done to many schools in their state.

“Oklahoma is OK,” goes the state slogan. Not so much. And, after the end of the 2017 regular session of the Texas Legislature, Texas isn’t OK, either. Apologies to Oklahoma for throwing rhetorical stones at them from our glass house.

How bad was this Legislature? Here’s how Eva DeLuna Castro of the Center for Public Policy Priorities summed up its budget for 2018-19:

“Overall, the state failed to make meaningful investments in public education; underfunded Medicaid ... and did the bare minimum for higher education. Those decisions do not set up our state to compete and succeed, or to create the kind of communities in which both business and families can thrive.”

Ouch. Texas Republican leaders, like their counterparts in Oklahoma, Kansas and some other gloomy red states, are sacrificing the future to inflexible ideology and immediate — and selfish — political needs.

If Texas was a ship, it’s like its captain and crew are stripping wood from the hull to repair a rotting deck. “Such a pretty, polished deck,” the Republicans shout from the crow’s nest. Just don’t look below the waterline.

Darkening the analogy, GOP leaders seem also to be locking the middle-income families and less fortunate Texans in steerage class below decks. When the ship sinks, they’ll point to survival of the fittest and all that. They’re aiming to get the privileged to some fantasy island first.

The Legislature is guaranteeing a less-educated and less-healthy population. How does an economy improve under those conditions? It doesn’t.

As we take on more water, what businesses will want to relocate here and join us on a doomed voyage? Harvey Kronberg of the Quorum Report correctly worries that companies like Apple with diverse workforces will think again about locating major facilities here considering the mean-spiritedness of so much of the right’s socially regressive and oppressive agenda.

Consider: The Legislature passed Senate Bill 4, the “show us your papers” law that makes criminal suspects of Latinos — or people who might look Latino. The courts are bound to find the bill unconstitutional. After all, it ignores Fourth Amendment protections and allows the jailing of folks without probable cause.

But it was the debate itself that thrilled Lt. Gov. Dan Patrick, Gov. Greg Abbott and other backers of the bill. It sent the signal they wanted to send: “Latinos, be careful. The authorities are watching you.” It was a media version of the old right-wing voter suppression trick of posting signs near polling places that read, “You Could be Arrested.” Arrested for what was not made clear. The signs’ only point was fear.

This was a Legislature that passed a revised voter ID bill that they hoped would persuade the federal courts that they don’t “intentionally discriminate” after all. In rulings on the drawing of political district lines and earlier voter ID, courts have ruled six times that their discrimination against minorities was intentional.

But the new voter ID bill includes criminal penalties for misstating on an affidavit reasons for needing a waiver. Report that you couldn’t get an approved photo ID because you were immobilized by a broken right leg when you meant left leg, and you could go to prison.

Women in need of health care are unlikely to recognize any Friendship State friendliness in the Legislature’s actions — or inactions. Just one example: It did nothing to address the state’s maternal death rate, which is now higher than most industrialized countries.