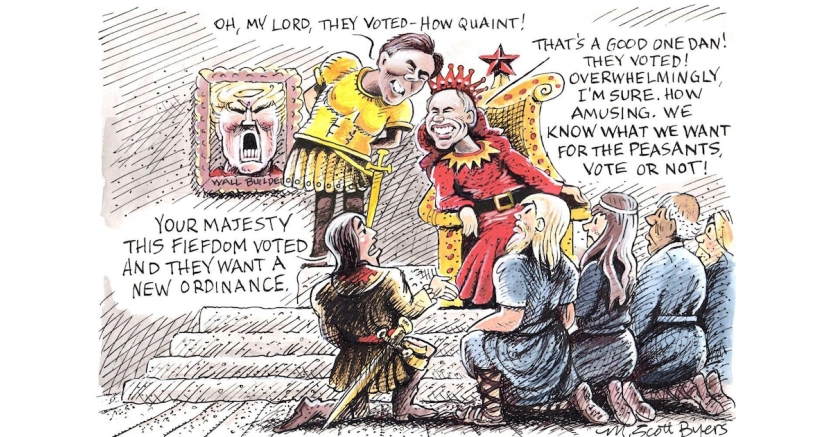 What is up with the Republican obsession with building walls? It's not just Donald Trump’s lonely fantasy of a big wall along our southern border. No, it’s walls of all kinds the GOP wants to build.

Republican Gov. Greg Abbott and his allies want walls between citizens and the voting booth, walls between local residents and their ability to make decisions for their neighborhoods and communities, walls between working families and prosperity, walls between people and healthcare.

Remember the Edgar Allen Poe story, “The Cask of Amontillado,” in which a guy with a grudge imprisons his adversary and leaves him to die behind a wall of bricks? It’s not a bad analogy for today’s Republican wall builders. They hold so many grudges against those who dispute their authority that they need a lot of walls.

One such proposed wall goes by the name “preemption.” It refers to the hope that state government will preempt local ordinances some special interests or Republican donors disapprove of. For instance, Austin and San Antonio passed paid sick leave ordinances for local employees.

Now, a gaggle of special interests has formed a group to lobby the Texas Legislature to preempt those ordinances, along with some other local laws, like plastic bag prohibitions.

Risking accusations of incivility, in our current context would it be altogether mean to borrow the collective term for crows to use instead of the word gaggle, as in, “a murder of special interests?” Just asking.

Anyway, this group, the Alliance for Securing and Strengthening the Economy in Texas (ASSET, get the cleverness?), is stunned that city governments would actually put the welfare of workers ahead of the pocketbooks of wealthy owners.

So, here come Abbott and allies with their chisels and trowels, ready to wall off local governments and residents. It no longer matters whether a majority of a city, county or school district’s citizens support an ordinance.

How quaint to believe we can shape our neighborhoods and communities to our liking. The feudal lords of Austin must be obeyed. Sick workers must remain unpaid.

Abbott, Lt. Gov. Dan Patrick and other Republican leaders have other motivations, of course. It’s not all about making sure your waiter comes to work with flu. They worry about the current Democratic takeover of urban governments throughout the state.

When Abbott screams about taking over Houston public schools, remember, it’s not about education. It’s about wall building. He wants to wall us off from any say-so in the operation of our local schools. All the better for him to privatize them and put them under the control of corporations who contribute to his campaigns.

Lest local governments try to raise revenue to overcome the hardships of all these walls, Abbott and the GOP leadership want to cap their taxing authority. Guess that’s a ceiling and not a wall, but you get the point.