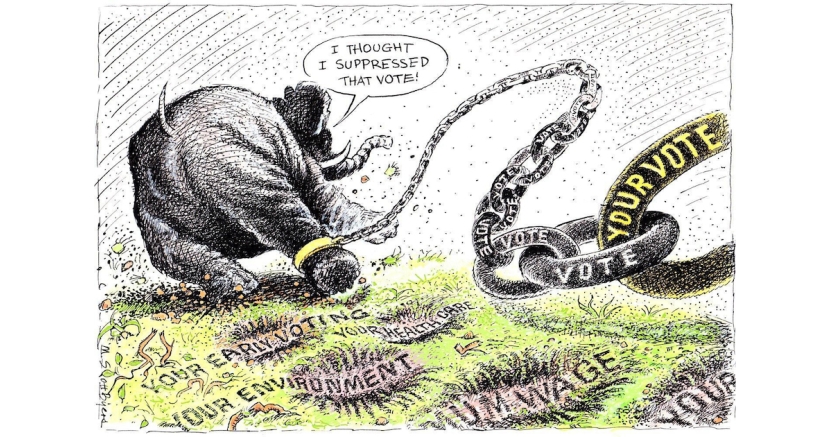 The Texas primary election days are upon us. Early voting runs from Tuesday through Feb. 28. Election day is March 3. To make voting even easier and more convenient, residents of Travis and Williamson counties can vote at any polling place in the county where they live.

So, let’s not hear any excuses. Americans bled and died for our right to vote, and the world our children and grandchildren will live in will be built by our votes. Don’t want to vote? You are leaving yourselves and your families out in the cold.

Yes, the noise of election season can be deafening. Annoying, even. Folks’ political likes and dislikes are all too loud on social media and in the real world as well. Politics can be an ugly business. Sometimes we just don’t want to get the ugliness on our clothes. Consequently, we don’t vote.

It’s an illusion that you can remain free of politics, however, by refusing to vote. Does your family have health insurance? Even if you have it, can you afford it?

Are you working two or three minimum wage jobs to just keep your family afloat? Politicians who stand for election make the decisions about government-mandated minimum wages. When you refuse to vote, you are passively accepting the decisions of those who do vote.

How about the environment? You should be concerned about the climate crisis because its effects are unfolding across the globe, from melting ice sheets to deadly wildfires from California to Australia. When you refuse to vote, you are tossing gasoline on the fires. You are not an innocent bystander. You are a guilty one.

Now, it’s true that there are some politicians who want you to believe your vote doesn’t matter. They pass laws to suppress the vote. Those laws — reductions in polling locations or early voting dates, strict identification requirements, and so on — are intended to demoralize you and discourage you from voting.

The cynics behind the moves believe they will lose if eligible citizens vote in large numbers. I guess they believe it costs them less to suppress your vote than it would cost them to persuade you to vote for them.

There’s another way to read their message, however. If they are going to go to the trouble to try and suppress your vote, your vote must really matter. You are more powerful than you know. Those who would deny your right to vote are doing so because they are scared of you. As they should be.

In today’s complicated world, it’s easy to think our single voices don’t matter. We say, “I’m just one voter. What possible difference can I make?”

All the difference in the world. Democracy recognizes and promotes the power of the individual voice. You are the reason the Framers designed it the way they did.

Silencing ourselves diminishes everyone and leads to the very disharmony we find so annoying. Your vote is your voice. Sing out!