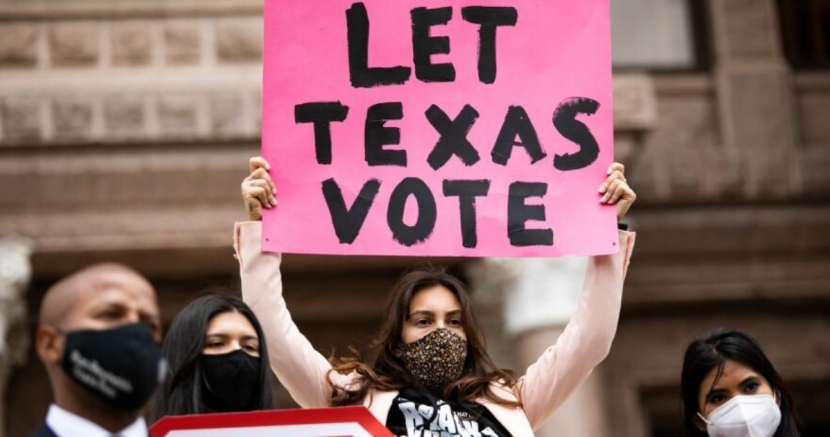 Just how empty are the claims of rampant voter fraud Texas Republicans use to justify further restrictions on our freedom to vote? Consider the following:

Let’s take each of these tales one by one, beginning with Ken Paxton’s Gregg County Con, in which four people were indicted on 134 felony counts of election crimes. The matter became a centerpiece of Republican arguments that voter fraud was rampant. It, and Trump’s claims that the 2020 election was stolen from him, were used to justify new draconian restrictions on voting by the Texas Legislature in 2021.

In the end, the storm cloud of suspicions in Gregg County evaporated as the four defendants pleaded to minor misdemeanors. No one did any jail time, and officials appear reluctant to discuss the matter further.

In the Steven Hotze escapade, Hotze and others cooked up a conspiracy that Democrats were scheming to collect hundreds of thousands of illegal ballots in 2020. Hotze’s investigator, Mark Aguirre, staked out the home of a person he believed was in on this massive conspiracy. Aguirre believed a pickup truck parked by the home contained the hundreds of thousands of illegal ballots.

When the truck pulled away early one morning, Aguirre ran into it to force it to stop. Then held the driver at gunpoint. Further tragedy was prevented when a Houston police officer happened by and spotted a guy aiming a pistol at another guy. Reasonably, the police officer intervened.

It turned out that Aguirre had been staking out the wrong home. The driver was an innocent plumber. Instead of illegal ballots, the truck was full of plumbing supplies, and Hotze’s delusions of voter fraud were revealed as little more than “pipe dreams.”

By the way, the day before the assault at gunpoint, Hotze called then-U.S. Attorney Ryan Patrick (Lt. Gov. Dan Patrick’s son) to ask for help in nailing the vote fraudsters. Hotze went to the trouble of detailing the plans to Patrick, including plans to wreck the poor plumber’s car and conduct a “citizen’s arrest.”

The five-year prison sentence of Crystal Mason deservedly became a national scandal. Mason was convicted of voting illegally in 2016 after casting a provisional ballot while on supervised release for a federal conviction. A poll worker had advised Mason to cast a provisional ballot when Mason discovered she wasn’t on the voter roll, and Mason testified she was unaware that she was ineligible to vote while on supervision.

Most observers found the five-year sentence ridiculously excessive. It seemed like the long imprisonment was itself intended to suppress the votes of folks, scaring them about the lengths conservative officials will go to intimidate would-be voters.

So, the next time GOP officials trot out tales of fraud to justify attacks on our freedom to vote, keep the image in your mind of Ken Paxton and Donald Trump hopping awkwardly about for the cameras in an old, two-man canvas horse suit. Theirs is an intimidation act, but it’s really hard to be intimidated by two guys in a horse suit.

Their attacks on our freedom to vote are serious. We can and must resist them, but maybe we can humiliate them with a head-shake and a smile when we vote