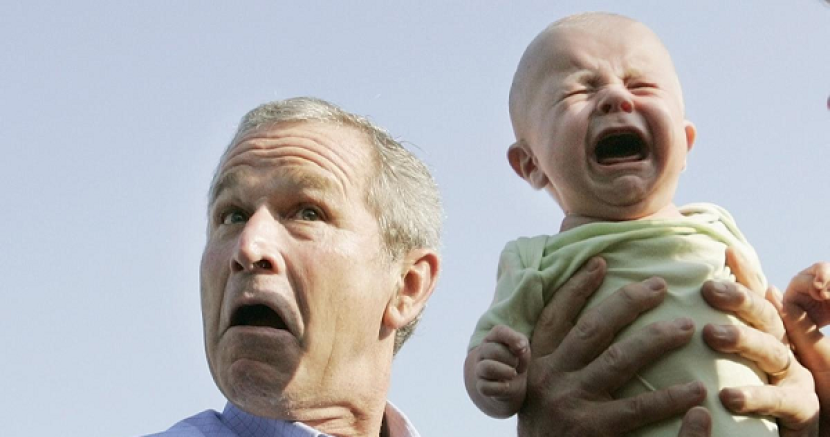 The truth eventually comes out

The movie "Truth," is a story about George W. Bush's National Guard records - or lack thereof - and the CBS news team that broke the story. It's a film that underscores the importance of free speech and of an independent free press.

The story broke during the 2004 election cycle and the Republican spin machine went into high-gear to defend Bush, lobbing inaccurate attacks at the media while doing everything possible to try to discredit documents showing the George W. Bush walked out during his service in the Guard.

It's an example of how Republicans will do anything to stop a bad story. Our own Glenn Smith writes about this in the Huffington Post, this excerpt sets up the scenario:

Flash forward to the Sept. 8, 2004 60 Minutes II report on Bush and the Guard. The report included some memos that added to the overwhelming evidence that Bush had simply walked away from his sworn duties and responsibilities to the Guard in 1972. The memos were immediately attacked as forgeries, first by right-wing bloggers. Just like the Nixon White House, the Bush White House moved immediately to use these accusations to discredit all reporting on Bush's tenure in the Guard. Let's just say that the Bush effort was far more successful than Nixon's effort. The times had changed.

Even if the documents could be criticized (falsely, it turns out), we can draw a close parallel with Woodward and Bernstein's story on Haldeman: the story about Bush abandoning his service in the Air National Guard was also true.

Smith draws comparisons to the Watergate scandal, pointing out how the Washington Post stood by its stories and its reporters when the paper's investigative pieces revealed that the Nixon White House was in fact connected to the Watergate burglary.

By way of comparison, the fallout over the 2004 CBS story on Bush's National Guard service was quite the opposite, with the media conglomerate showing more concern for its political relationships than for its investigative team.

The Republicans went into high-gear then and they are doing it again now. More from the HuffPo story:

Attacks on Truth from CBS, Viacom and Bush allies have already begun. The Bush family has gone to great extremes over the years to try to hide Bush's National Guard secrets. That the man who led the nation into the disastrous war in Iraq had himself shirked his military duty when young is not something they will leave unchallenged. This is especially true in a year in which his brother, Jeb, is running for president.

But these tactics keep happening.

In 2012, a similar situation happened when a wealth Republican backer sued Mother Jones and another reporter over a story he disagreed with.

TODAY WE ARE happy to announce a monumental legal victory for Mother Jones: A judge in Idaho has ruled in our favor on all claims in a defamation case filed by a major Republican donor, Frank VanderSloot, and his company, Melaleuca Inc. In a decision issued Tuesday, the court found that Mother Jones did not defame VanderSloot or Melaleuca because "all of the statements at issue are non-actionable truth or substantial truth." The court also found that the statements were protected as fair comment under the First Amendment.

In this instance, Mother Jones won the legal case - but only after spending millions to defend its reporting:

This was not a dispute over a few words. It was a push, by a superrich businessman and donor, to wipe out news coverage that he disapproved of. Had he been successful, it would have been a chilling indicator that the 0.01 percent can control not only the financing of political campaigns, but also media coverage of those campaigns.

We don't always agree with the press but they are an important arbiter in our political process. But the right wing's "win at all costs" approach demonstrates that the right wing will stop at nothing to quash dissenting voices, or even those that differ from their talking points.

But in the two cases summarized above, one thing is evident: the truth eventually comes out.