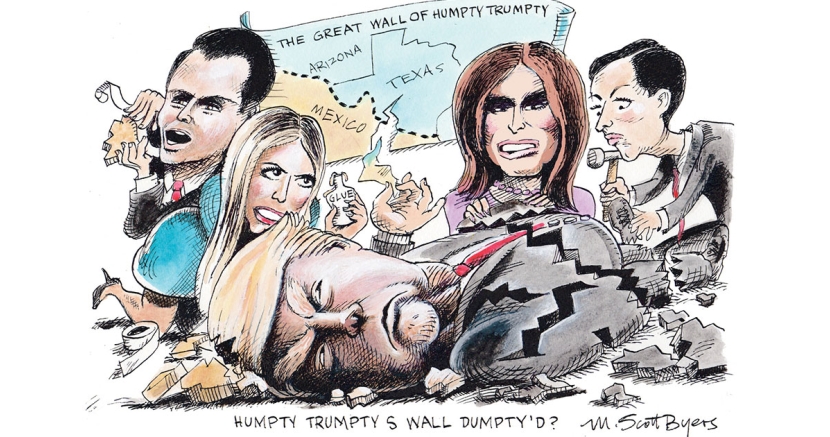 You might say that in the end, most wall builders wind up mocked as Humpty Dumpties.

As folks contemplate President Donald Trump's border wall, a thought experiment might help. Imagine your family has been exiled behind such a wall in your town or city.

For some reason -- bigotry, scapegoating, or some panicked delusion or other -- your former neighbors decided you are no longer wanted.

I know, some won’t have to imagine this, but only look. Or remember.

Anyway, the wall has been built so that it hides the sunrise from you during all the seasons of the year. You used to sit on the porch with coffee and watch the morning come. To your eyes at night, the wall’s towering presence creates an eerie, horizontal void in earth and sky, a rupture in the world.

History’s walled-off people have long memories. How could they not? And for that reason, history’s wall builders don’t fare too well in the stories handed down by those pinned behind walls and those on the other side who came to see the injustice of it all.

You might say that in the end, most wall builders wind up mocked as Humpty Dumpties. It’s a caricature Trump seems almost made to fulfill.

The builders of the walls of Jericho, of course, were more than mocked in the Bible. Joshua and his horn section brought the walls down with a song.

The Roman emperor Hadrian built a wall across England. Historians are still arguing about why he did so. Many think Hadrian was just trying to make a political point: “Believe me, I can tell you this. I can build a Great Wall!” Sound familiar?

In Europe, Venice was the first city to actually put a wall around some people they didn’t like. Jews were forced to live on a walled island where cannons had once been made. The word “ghetto” comes from “geto,” Venetian dialect for the foundry on that island.

There was, of course, the Berlin Wall. It’s gone now, too. Roger Waters of Pink Floyd performed songs from their hit, “The Wall,” at the site of the fallen Berlin Wall. The Pink Floyd film and music are about an insecure guy named Pink (Oh, that he was named Orange!) who builds a wall around himself. That wall, too, came down.

That’s what walls do. They fall.

Trump’s wall is part of a thoroughgoing campaign of intimidation against Hispanics in this country. To be sure, in a fit of Munchausen by Proxy Syndrome, Trump first threatened to repeal DACA and deport 800,000 young people brought to America as children. Then, he told them he’d save them, no worries.

But Trump’s campaign continues. He is doing what he can on the voter suppression front. His Justice Department is now defending the Texas voter ID law courts have found discriminated against Hispanics and African-Americans.

The administration also backs Senate Bill 4, a bill now found by a federal judge to be unconstitutional in the main. Among other ill-begotten features, the bill required local law enforcement to violate the Fourth Amendment protections against unlawful detention.

“All in all,” as Pink Floyd sings, each of these is “just a brick in the Wall.”

Trump, who claimed throughout his campaign that Mexico would pay us to wall themselves off, is now hedging a bit. Many thought he might hold hostage funding for hurricane recovery in Texas, a move that would have punished Texans beneath a wall of water to build his wall of stone. He thought the better of that.

Even as Homeland Security accepts new proposals for the wall, funding remains in doubt for Trump’s Great Insult to Democracy and Free People Everywhere.

Congress will be hashing out another budget in the weeks and months to come, and the White House will, fittingly, have a devil of a time persuading lawmakers to fund his pet project.

With the recovery demands in the U.S. Southeast after Hurricane Irma on top of Hurricane Harvey needs in Texas and Louisiana, Congress may be in no mood to divert billions more for Trump’s border folly. Democrats are united against it, and Republicans already feel that Trump betrayed them on a budget deal with Democrats.

Trump’s Humpty may be dumped before he can even build a wall to fall from.