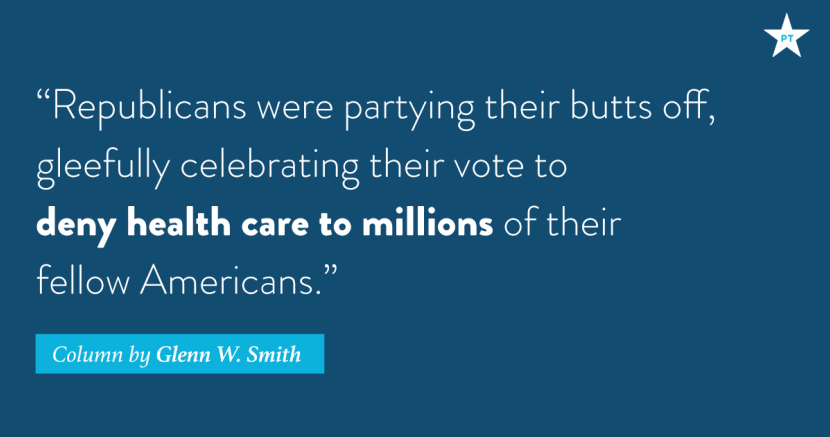 It was a hateful spectacle unlike anything this writer has ever seen. U.S. House Republicans were partying their butts off, gleefully celebrating their vote to deny health care to millions of their fellow Americans.

Ed. note: the following column was originally published in the Quorum Report.

People could die because of their vote. Babies. Elderly people. People of all ages with pre-existing conditions who could be denied coverage under the measure’s terms.

The GOP celebrants, cheeks brightened by joy, were so proud of themselves they could almost burst. They were proud that they’d voted for something they knew would cause unnecessary illnesses and deaths.

How does this happen?

Here in Texas, members of this same political party of hate have voted to scrap Fourth Amendment protections so Latinos can be harassed, jailed without probable cause and maybe deported if they don’t happen to have proof of citizenship with them.

Transgendered folks are targeted and dehumanized with restrictions on where they can go to the bathroom.

Women have had their access to health care greatly diminished. The Texas Medical Association calls Texas “the uninsured capital of the United States.” That’s saying something. GOP leaders refused to accept billions in federal funds that could have relieved that problem and saved countless lives.

Should something like the American Health Care Act just approved by the U.S. House actually become law, we can add millions to that uninsured category.

This, I suppose, is one way of keeping Texas’ jobless numbers down. We’ll just let a bunch of people die for lack of health care so they disappear from the list of the jobless. We’ll imprison some others without cause, too. That’ll help our employment figures.

We can call it Another Texas Miracle!

What accounts for the meanness? There is a reasonable conservatism that balks at wasteful spending, of course. It was driven by fiscal caution, not hate. It seems to have vanished, however. And, sadly, racism was once endemic to the Democratic Party, too, but that was before

Democratic President Lyndon Johnson signed the Civil Rights and Voting Rights Acts and all the bigots bolted to the Republican Party.

There has always been some mean-spiritedness. But today it has reached a new level. It’s as if meanness and hate are both means and ends.

How else can we explain the wild glee with which U.S. House Republicans celebrated their vote to take away health care from millions and millions? They are lying to the public about all this, of course. For instance, they jaw-jaw that those with pre-existing conditions will still be covered when they know full well their measure will price them out of the insurance market. Promises of “high risk pools” are empty, too.

They are lying to the public while they celebrate. But are they lying to themselves as well? Do they understand the deadly harm they are causing? Are they unable to see the consequences of their actions?

Is there something like mass hysteria loose among the Republicans? Are they riding a runaway train of hatred that through some magic of relativity is moving so fast they no longer feel it moving at all?

Onlookers can see into the windows of this train occasionally. In the violence at Donald Trump rallies for instance. In shouts of “lock her up, lock her up.”

Not even the most cynical or hateful politician can really believe Texas will be better off if more people are denied health care. Surely GOP leaders can see that Texas, as “the uninsured capital of the United States,” becomes a much more unlivable and even dangerous place for everyone, including those blessed enough to have insurance.

But maybe this is what happens when hate, discrimination and bigotry become both means and ends. And I think they have. Policy consequences are simply ignored while GOP policy makers display to their most extreme voters that they can hate, too.

It’s worth considering that some high number of Trump voters here and elsewhere liked Trump because he was willing to beat up people they wanted to see beaten up. He was fighting for them! Trump’s ignorance and deceit could be ignored because he would Build That Wall!

GOP leaders who know better, and there are some, need to find a way to slow the runaway train and guide it into a station. They need a pause to see where they are heading. Civil society itself is threatened when hatred and bigotry dominate as both means and ends.