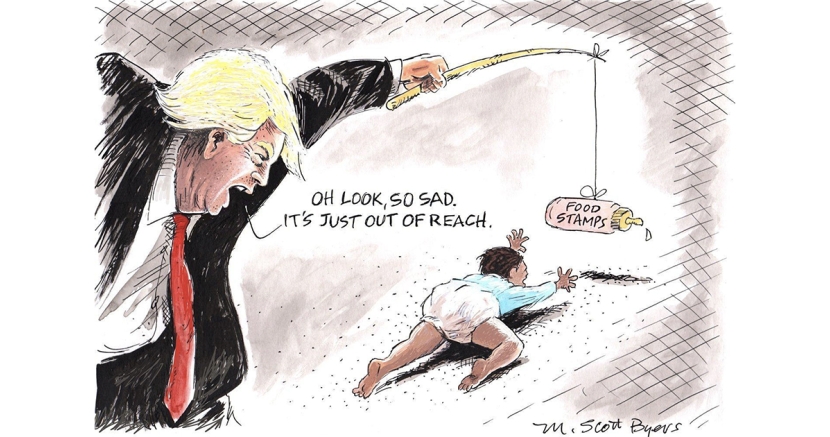 Illustration by M. Scott Byers
The Trump Administration has announced new restrictions on food stamp recipients that could take food away from millions of Americans.

The Trump Administration has announced new restrictions on food stamp recipients that experts think could eventually take food from the mouths of 3.7 million low-income Americans, including half a million families with children.

It’s not that Trump is motivated to save tax dollars. If that were the case, why has he already spent $114 million in taxpayer money on his golf outings?

No, reducing the federal budget is not Trump’s goal. Cruelty is his goal, the same cruelty that led Trump to have refugee children locked in cages.

The first rule change in the already meager Supplemental Nutrition Assistance Program (SNAP), announced this month, will restrict state waivers of restrictions on recipients in impoverished areas. Two other planned rule changes, which haven’t been finalized yet, will further tighten eligibility requirements.

This is the bureaucratic analogue to hate speech. The moves are intended to punish and demean. Trump is a schoolyard bully stealing the lunch money and kicking sand into the mouths of the most defenseless among us. What a tough guy our president is.

What’s more worrisome than Trump is the crowd gathered in the schoolyard to cheer him on. How does one cheer the intentional starving of one’s fellow citizens?

The supplemental food assistance program is intended to help those in areas that have suffered economically, areas where unemployment is higher and opportunities are fewer. While the overall economy might be OK for now, there are places that suffer and people who suffer because they can’t escape those places.

A 2016 Brookings Institute report said, “The many barriers imposed by living in a poor neighborhood make it that much harder for residents to move up the economic ladder, and their chances of doing so only diminish the longer they live in such neighborhoods.”

Agriculture Secretary Sonny Perdue says the new rules are intended to move people “to self-sufficiency,” which is just another way of saying, “let them eat cake.”

Maybe those who oppose the SNAP program because they believe “people like us” don’t need or receive the benefits should check out the statistics that show the program helps a representative cross-section of Americans.

It has long been the malevolent habit of conservatives to “other” those in need of a little help. Of course, those who argue for a “dog eat dog” world tend to be those with bigger, better fed dogs.

They are the same ones who utter the “pull yourself up by your bootstraps” claptrap. When first mentioned in the 19th century, the phrase was used to mock an inventor’s wild claims. The inventor “has succeeded in handing himself over the Cumberland river, or a barn yard fence, by the straps of his boots,” a newspaper teased.

It is fairly obvious that it is impossible to leap over a fence by pulling oneself up by one’s bootstraps. So, maybe it’s just more demeaning language from the haves aimed at the have-nots. “Y’all are so dumb you think you can pull yourself up by your bootstraps.”