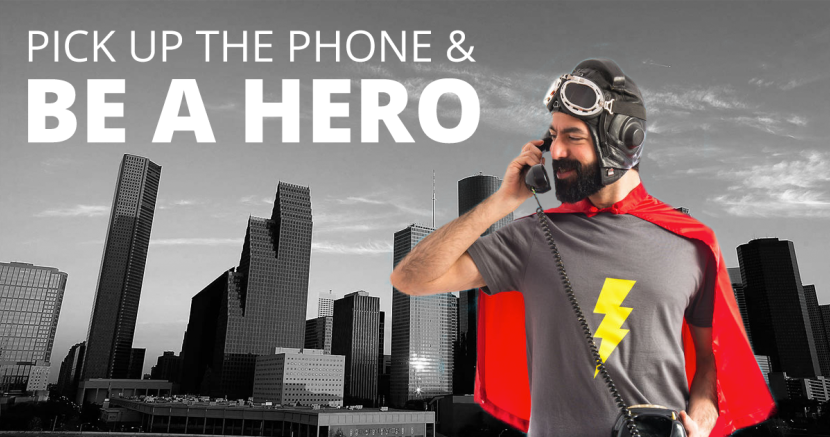 By now you might have heard that Houston has a big election coming up on November 3, or October 19 through October 30 for the early voters among us. In less than a month, Proposition 1 the Houston Equal Rights Ordinance (HERO) will be on the ballot.

Here's why you should pick up the phone, call everyone you know in Houston, and tell them to vote YES on HERO:

If HERO does not pass, it will be totally legal to discriminate against people who are gay and transgender in Houston. Sexual orientation and gender identity are not covered by anti-discrimination laws at the state or federal level. Gay and transgender people living in Houston today can legally get fired for reasons that have nothing to do with their job performance.

HERO also strengthens local protections against discrimination for everyone else. HERO provides a much needed local solution to ensure that all Houstonians — regardless of race, religion, age, gender, sexual orientation or gender identity, pregnancy, disability, or military status — can earn a living, find a place to live, or be served in public spaces without being discriminated against.

All people — including those who are gay and transgender — should be treated fairly and equally.

2. The fight for HERO matters outside of Houston too.

Houston — the third largest city in the country — is ground zero in the national battle for equality. While the impact of HERO on the ground in Houston is enormous, the stakes are even higher. The implications of the fight for HERO — whether it passes or is repealed — could have ripple effects throughout the state and country. The issues at play in Houston today represent the new frontier in post-marriage equality, anti-LGBT discrimination.

The opposition said so much in an email to their supporters:

3. You can make a difference.

The opposition to HERO is taking #2 pretty seriously. They are using Houston as a tactical testing ground for fear and hate mongering and pouring tons of money into grossly deceptive advertising.

In its endorsement of HERO, the Houston Chronicle editorial board agreed:

“The organized opposition to Houston's proposed equal rights ordinance is mendacious, deceitful and irresponsible in the extreme...What we don't need is a nasty, cynical campaign playing on voters' fear and ignorance. This great city is bigger than that.”

Though the ground campaign for HERO, Houston Unites, is highly mobilized, because of this fierce opposition and very low voter turnout for these elections, every vote — and every call you make — will count.

The last day to register to vote in Harris County is October 5. Click here to register.