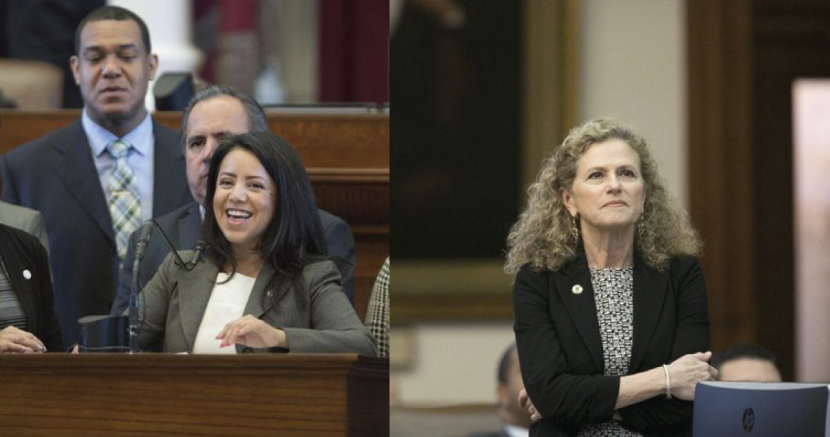 State Representatives Donna Howard (D- Austin) and Victoria Neave (D-Dallas) lead in the charge to stand up for for survivors of sexual assault by reforming Texas’ beleaguered rape kit system. Two of their bills — HB 281 and HB 1729 — passed both chambers with bipartisan support this session and tackled the problem of mishandling and ineffective tracking of rape kits in Texas.

Representative Howard’s HB 281 establishes a statewide DNA tracking system through which survivors can track their DNA samples and expands access to the nationwide DNA database. Representative Neave’s HB 1729 gives Texans renewing their driver’s license the opportunity to donate $1 to chip away at cost of working through the rape kit backlog — providing survivors with justice as fast as possible.

A rape kit is used to collect and preserve any possible DNA evidence from a sexual assault forensic exam. This DNA evidence can support survivors in court if they decide to press legal charges against the perpetrator. Even if the assailant is not charged, their DNA can be added to a national database that can assist law enforcement in investigations of future charges the assailant incurs.

This is a critical tool for investigators to track down and prosecute sexual assault offenders. Unfortunately, rape kits are often spoken about in connection with the “backlog.” The rape kit backlog refers to the thousands of stockpiled rape kits in Texas yet to be analyzed. Every unanalyzed rape kit is an unprosecuted perpetrator still on the streets.

Tragic sexual assault testimonies shared throughout this legislative session opened the discussion on how to curtail the appalling rape statistics across the state. These legislators are making sure the state is accountable for bringing justice to sexual assault survivors reliably and efficiently. Their bills had bipartisan support throughout the legislative process - HB 281 has now been sent to Governor Abbott's desk and HB 1729 was already signed into law - shining a light on the progressive potential the legislature has when focused on real, pressing issues in our state.