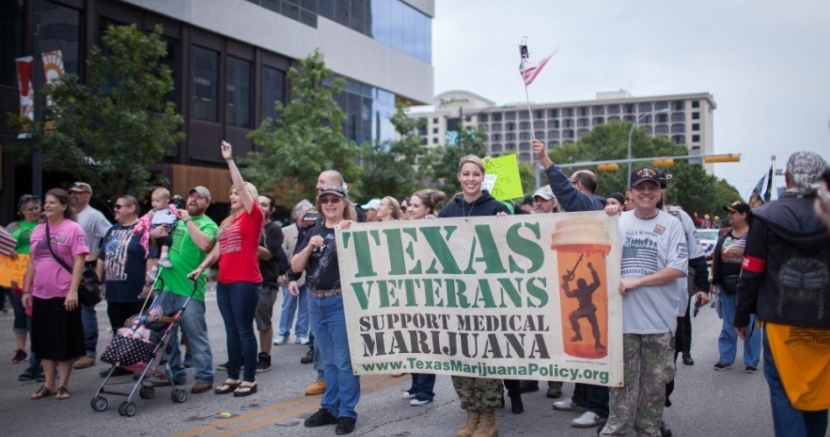 A year ago the Texas Chapter of the National Organization for the Reform of Marijuana Laws (Texas NORML) launched Operation Trapped-- an awareness campaign highlighting the dangers posed to Veterans from prescription drug use.

Over the past year, almost a thousand Veterans-- all of whom support marijuana policy reform-- sent the group their empty prescription drug bottles. Inside of the bottles, Veterans included slips of paper with their branch of military, dates of service, and disability.

In January the empty prescriptions will be put on exhibit in the Capitol Building, sending a message to  lawmakers about the necessity of alternative pain management through cannabis.

Operation Trapped Puts The Dangers of Prescription Drug Use On Display

Veterans deserve medical freedom,” said one member of Texas NORML, “the overprescription of drugs is a harsh reality Vets face once they return from service. It shouldn’t be this way.

According to the Journal of American Medical Association , “Vets who have been prescribed painkillers and suffer from PTSD along with physical pain are at high risk for drug and alcohol abuse.”

Yet, in Texas, the state with the second highest Veteran population in the nation, there is no safe and legal alternative to prescription drugs. Not only that, but “the thousands of Texas veterans who take cannabis to relieve the symptoms of post-traumatic stress (PTSD), traumatic brain injury (TBI), chronic pain, or other service-related injuries, ” are treated like criminals.

Despite the legalization of medical marijuana in 28 other states, Texas continues to criminalize those-- including Veterans-- who use marijuana to treat disabilities.

Some opponents, such as Senator Donna Campbell, dismiss medical marijuana’s scientifically backed benefits as nothing more than anecdotal evidence . Others, such as the Texas Sheriff’s Association, worry that legalization will increase children’s exposure to marijuana at greater frequencies and at earlier ages .

Juliette, a Veteran and member of Texas NORML, finds her own experience contradictory to opponent's’ reasoning.

“I’m a child of the military. My father served nine tours as a combat medic in Vietnam. He suffered three purple hearts. He was a loving, caring father-- I never had a clue that he used [medical marijuana],” says Juliette, “Who knows what shell of a man he could have been had he not used cannabis.”

Last Friday Veterans in support of marijuana policy reform gathered together and marched in the Veterans Day Parade with Texas NORML.

The group’s demand for change pressures Greg Abbott specifically, requesting that the Governor meet with a veteran from each conflict going back to the Korean War to show him the real people his laws are affecting.

“We want to bring [Operation Trapped] to Greg Abbott. We shouldn’t have to move out of the state to get the medical care we need,” said one Veteran, “It’s just ridiculous.”