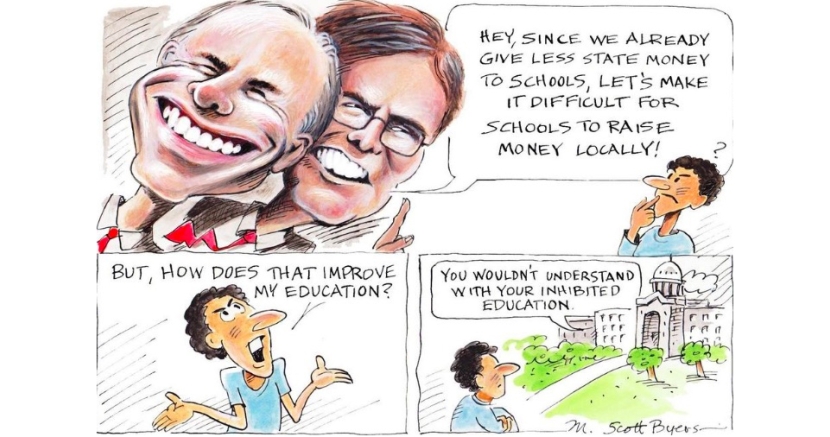 Glenn W. Smith
The state continues to spend less on schools, to the detriment of Texas children.

The following is not satire, however much we might wish it were. We are going to visit the ruinous state policies on property taxes that have left our schools struggling and now threaten local police and fire protection and other services.

The story could reach its end during the upcoming session of the Texas Legislature, which convenes in January. How it ends is up to us. Follow along, if you dare.

The Texas Legislature, cheered on by Gov. Greg Abbott, has cut the state’s share of spending on public education from 50 percent to 38 percent of the overall cost. Local school districts are forced to make up the difference with increased property taxes.

Also, because property wealth varies so much across the state, the state school finance law known as Robin Hood requires property-rich districts to share revenue with property-poor districts. Accidents of birth location would otherwise condemn children of poorer districts to inferior educations.

Here’s the scam: The Robin Hood plan was supposed to increase spending on education, but the state is using it as an excuse to spend less on schools from other state tax revenue.

This is the nearly perfect execution of the old street-con known as short-changing. Schools aren’t the only ones short-changed by the con.

Cities, counties and other local jurisdictions are pinched because the dramatic rise in local school taxes — made necessary by state tax policy — inhibits their political ability to raise funds necessary for police and fire protection, health care, roads, bridges, etc.

What could this mean? It could mean when your home catches fire, the fire truck must detour around a dangerous bridge, it gets there late and you get burned trying to put the fire out yourself. Your ambulance is also late, and because of your pain from the burns, it detours around pot-hole filled roads to an emergency room overcrowded because of a lack of available facilities, doctors and nurses. Ouch.

Now, as if to guarantee that scenario, Abbott, Lt. Gov. Dan Patrick and other Republican leaders are proposing local revenue caps — state-mandated limits on what local jurisdictions can do to keep us safe. One way or another, that’s what most local taxes are used for.

The con is still in progress. We can stop it. There is available state tax money (fix the franchise tax on businesses, close loopholes) to increase state spending on schools, and use recaptured funds from rich districts as they were supposed to be used.

Kill the dangerous revenue cap proposal. School districts would have to raise less revenue while local government could provide better services while keeping taxes down. Some businesses would pay more, but they’d get better-educated employees and improved infrastructure in the bargain.

And, residential homeowners would no longer get burned.