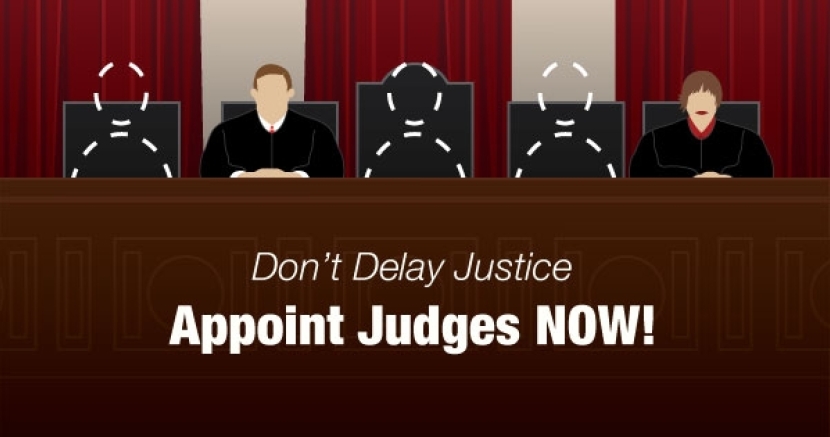 As President Obama ends his sixth year in office, much is being made about his legacy on federal courts. And if Texas Senators weren't so busy deliberately delaying the process, we'd be able to celebrate here in Texas too - instead of being worse off than everyone else, like we so often are.

That's great news...unless you're from Texas.`

While the rest of the country celebrates, deliberate delays by Senators John Cornyn and Ted Cruz have left Texas with nine judicial vacancies. The lack of action by our US Senators perpetuates a situation in which 1-in-5 of all judicial vacancies in the entire country are right here in Texas. If these vacancies are not filled, our federal courts will not be able to handle the issues — from marriage equality, voting rights, abortion access, health care to immigration — that affect us all.

Texas has seen some progress in recent months. After thousands of Texans joined us in calling on Senators Cornyn and Cruz to stop their delay tactics, three judges filled existing vacancies. And just this week, President Obama nominated another three judges to fill more vacancies, in what the Houston Chronicle is calling a test case for the new Senate:

The three judges were originally nominated Sept. 18, but were not confirmed before the 113th Congress adjourned last month, ending Democratic control of the Senate.

Nevertheless, all three are expected to benefit from rules changes adopted by Democrats easing confirmation of most presidential nominees by requiring only a 51-vote majority in the Senate.

The nominations could be a test of how quickly the Senate GOP leadership confirms presidential appointments over the next two years, although none of the Texas judges are considered controversial, according to GOP aides.

Will Senators Cornyn and Cruz continue their pattern of obstruction? Or will they finally listen to the thousands of Texans demanding they stop their deliberate delay and put qualified, diverse nominees on Texas' vacant courts?

We'll know more in the coming weeks. Until then, here's a complete snapshot at Texas' judicial vacancy crisis:

Progressive candidates: 4 tips for a better stump speech
4 days ago