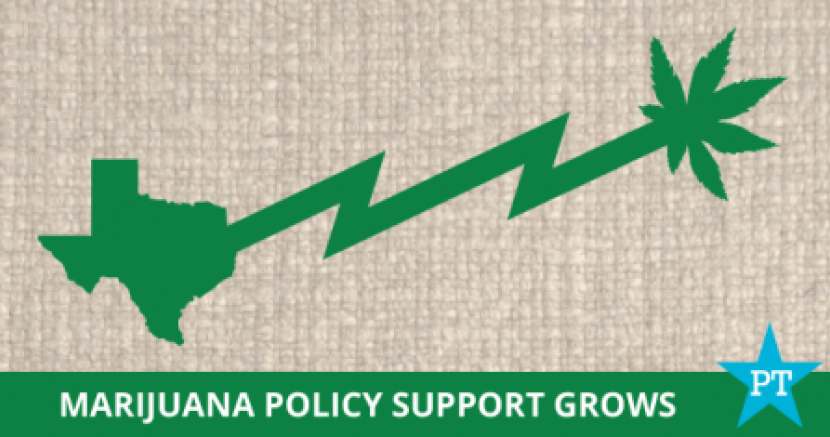 Following a year of unprecedented progress for marijuana policy reform, a new poll by the University of Texas at Austin and Texas Tribune finds growing support for marijuana - specifically, reducing criminal penalties for small possession.

Two years ago in 2013, a PPP poll found that 61% of Texans favored reducing penalties for small possession of marijuana. Today's poll shows that number has jumped to 68% - with strong bipartisan support across the board.

During the recent session, Rep. Joe Moody (D-El Paso) offered legislation that would have made possession of less than one ounce of marijuana a ticketable offense, like running a red light. In early April, a House committee hosted an historic hearing on the issue. The bill passed out of the committee but ran out of time before it could get a full vote in the Texas House.

As many experts and supporters testified that night, Rep. Moody's bill makes a lot of sense. Instead of jailing as many as 70,000 Texans - at a cost of over $700 million to the state every year - police can issue a ticket of up to $250 for anyone caught with one ounce or less of marijuana.

University of Texas at Austin pollster Daron Shaw offered the following analysis about the poll's finding:

Unlike their hidden divisions on other policy questions, the support for lower penalties for possession was strong across all of the subgroups in the survey.

“This one is obvious,” Shaw said. “If you took a real pro-law-and-order stance 10 years ago, you have to go through some sort of conversion.” Support was uniform, in his words, “from hippy-dippy liberals to the Tea Party.”

And remember - none of this would have happened if it wasn't for you!

In the last year you have taken actions, shared posts, and spread the word. You've talked with your friends, family and neighbors. You wrote and lobbied legislators. We took an issue from the fringe and put it smack dab in the mainstream.

Together, we collected 25,000 signatures in support of marijuana policy reform. That's phenomenal work!

With great partners in the Texans for Responsible Marijuana Policy coalition, we have changed the course of marijuana policy reform in Texas.

A full breakdown of the poll question on marijuana is below, courtesy of the Texas Politics Project at UT-Austin.