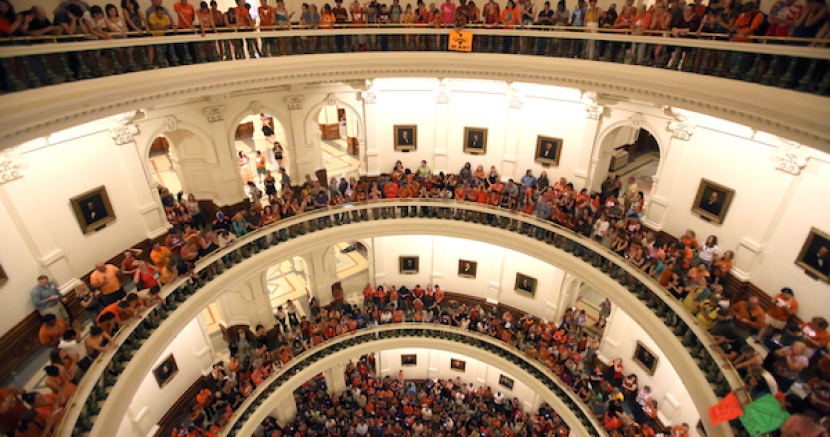 Apparently passing the most draconian anti-abortion law in the country last session wasn’t enough. Anti-abortion radicals in the Texas Legislature were back at it this week, trying to pass laws that would further restrict access to abortion care. The anti-abortion bills heard this week make one thing absolutely clear: these extremists aren’t going to stop until they’ve eliminated access to safe, legal abortion care for all Texas women.

On Tuesday, the House Judiciary & Civil Jurisprudence heard testimony on HB 723 by Rep. Phil King (R-Weatherford), a bill that would effectively ban abortion access for anyone under the age of 18 who is unable to involve a parent.

HB 723 would change the requirements for what a teenager would have to prove in order to get a judicial bypass for an abortion. Minors would have to prove all three grounds, rather than just one as is required by current law: that they are mature and well-informed, that notifying a parent would not be in their best interest and that there is a likelihood of abuse if a parent is notified.

.@hayslaw testifying against #HB723: “Bypass is very effective as a safety net” for teens who’ve been let down by families. #txlege #trusttx

.@JFarrarDist148: our role is to keep teens safe after their parents have abandoned them #HB723 #txlege #trusttx

.@JFarrarDist148 says that there are 90 people opposed to #HB723. Smithee: “It feels like more than that.” #trusttx #txlege

Ana Defrates @NLIRH: A young woman will know what's best for her own body moreso than any member of this body #TrustTX #txlege #HB3765

HB 3765—which would require minors wanting an abortion to get their consent forms notarized—further perpetuates the myth of coerced abortion, is unnecessary regulation and unfairly targets abortion providers for regulation.

Rep. Giddings: #HB3765 is just another disguised attempt to limit abortion access. Let's just call it what it is: Deception #txlege

Under current informed consent law, minors and their parents must already sign a consent form. Requiring that the minor’s consent be notarized would disproportionately impact low income and rural Texans and jeopardize confidentiality.

#HB3765 would disproportionately affect rural and low-income Texans. Rural communities may have limited options for notary.

Dude is basically saying an advantage of #HB3765 is notaries in small towns would know the minors and be aware of their abortions. #txlege

For second time today, Rep. Laubenberg not there to present her own anti-abortion bill #HB3446 #txlege #TrustTX

The bill singles out abortion providers and is not only a targeted attempt to over-regulate these health care providers, but also represents a lack of understanding about the populations the bill purports to help.

B Cushing, med student, against #HB3446: This is a targeted regulation of abortion providers & in no way enhances safety #trusttx #txlege

Another bill heard on Wednesday, HB 3374, would prohibit providers from giving out information about a woman’s legal right to terminate a pregnancy "when a prenatal test indicates that the unborn child has Down Syndrome or any other health condition.”

Unfortunately, these aren’t the only bills Texas lawmakers have introduced aimed at restricting Texas women’s access to safe, legal and timely abortion care.