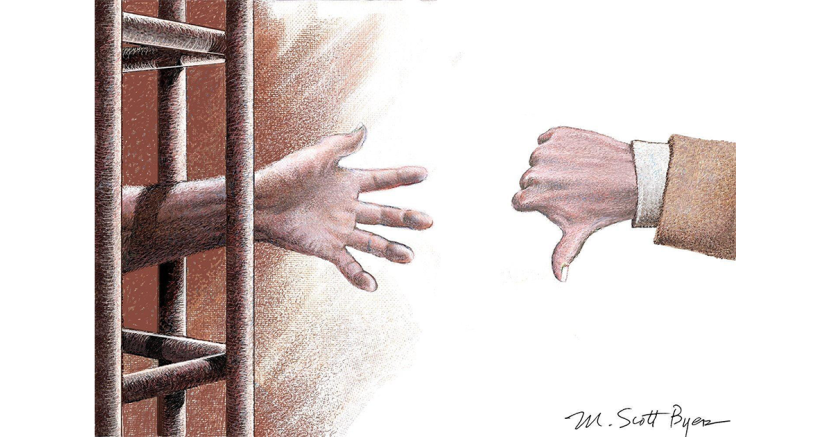 Illustration by M. Scott Byers
Our society stigmatizes those suffering from mental health issues, but those who should be ashamed are the leaders who have failed to help them.

A recent, well-researched piece in the New York Times asked why Americans are so depressed these days. Among the 2,000-plus comments were more than a few like this: “Speak for yourself. I and all of my born-again Christian, Midwestern, white male friends are deliriously happy with how things are going.”

The commenter wasn’t from Texas, but there’s a clue in his remarks as to why Texas still ranks last among the 50 states and the District of Columbia in access to mental health services. It’s the “I’m okay, you’re on your own,” attitude that drives Texas’ cold-hearted attitude toward those in need.

In recent months, Gov. Greg Abbott has taken to demonizing the homeless, especially those in Austin. Studies find that about 45 percent of the homeless population suffer from mental illness.

Consider that statistic as you also consider that Texas ranks last in access to mental health services. Also, we are next to last in terms of uninsured adults with mental illness. There are nearly 700,000 Texans in that circumstance. See the connection to the homeless crisis, Governor?

Studies reveal that 40 million American adults suffer from anxiety disorder. About 7% of children ages 3-17 experience anxiety. And about 17 million adults experienced a depressive episode this past year.

Our society stigmatizes those suffering from mental health issues, but those who should be ashamed are the leaders who have failed to help them.

In fairness, Texas has made gains in recent years. The state has increased funding for mental health services every legislative session since 2013. Adherence to “Assertive Community Treatment” for those diagnosed with mental illness and already hospitalized multiple times has been successful. It’s reduced expensive incarcerations, hospitalizations and emergency room visits.

We have to thank dedicated advocates and health care workers at the local and state levels for these gains. My view is that while available resources have grown, the real improvements come from the hearts and the hard work of those who have given their lives to helping others.

Still, if you will pardon a sports analogy in such a serious context, the state’s last-place finish makes it seem like even these gains are part of the Texas team’s never-ending “rebuilding years.” We’re trying harder, but we’re still finishing last.

A 2019 video from the Texas Association of Counties argues that county governments need more resources to address the mental health crisis. We are “the first people to be contacted and the only people who can’t say, ‘No,’” when sent someone in mental health difficulties, said Dennis Wilson, Limestone County Sheriff.

“The sadness is, over the years we’ve used the criminal justice system to hide these people,” Wilson said. “The largest mental health hospitals are our county jails.”

There are moves at the state level to rectify this. State Sen. Kirk Watson of Austin helped win legislative approval of plans to rebuild the Austin State Hospital, the San Antonio State Hospital and a 100-bed facility at Rusk State Hospital.

The mental health of a society has to be judged by the health of all its individuals. The Times’ commenter was dead wrong. If you’re not OK, neither am I.