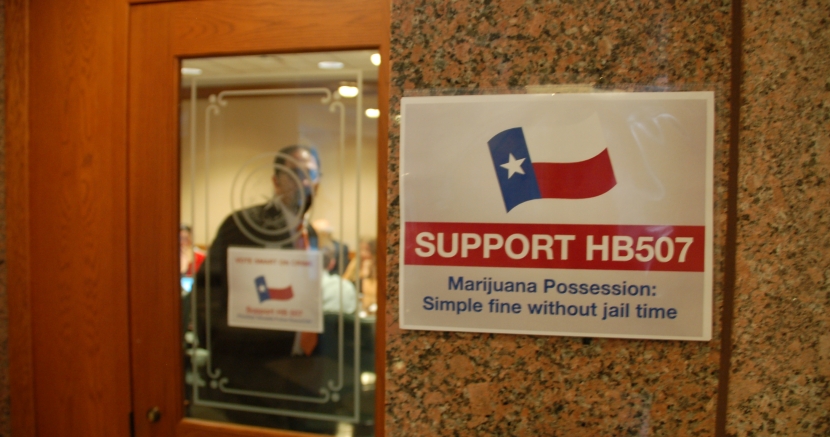 Late last night, the Texas House Criminal Jurisprudence Committee heard testimony from over 60 witnesses on marijuana policy reform bills - all focused on reducing criminal penalties from a felony to a ticket for small possession of marijuana.

Supporters at the hearing, which went until 2am, were focused on Rep. Joe Moody's HB 507. Our office provided written testimony in support of HB 507 to committee members, highlighting the fact that over 17,000 Texans have signed a petition in support of marijuana policy reform. That total climbed to more than 18,000 by the time the hearing ended.

So what was everyone talking about - and why does it have such strong support?

As many experts and supporters testified, Rep. Moody's bill makes sense. Instead of jailing as many as 70,000 Texans - at a cost of over $700 million to the state every year - police can issue a ticket of up to $250 for anyone caught with one ounce or less of marijuana.

Perhaps most importantly, not a single witness or legislator spoke about any structural policy problems with HB 507. What that means is no one objected to the technical language for establishing a civil penalty (changing small possession from a felony to a ticket) - an important achievement for those hoping the bill moves quickly to the full Texas House for a vote.

Professors from Rice University's Baker Institute were also on hand to shoot down some common myths - making sure the committee members know that marijuana is not a gateway drug, and that teen use has not increased in states that have reduced criminal penalties.

Overall, it was a hopeful hearing for those of us in support of marijuana policy reform. All seven committee members - four Republicans, and three Democrats - stayed up until 2am to hear all the testimony. Members avoided joking about the issue, asked good questions, and were engaged with those who stayed up so late to advocate for HB 507.

While no bill was immediately voted out (it is the committee's practice to wait a week before voting out bills they hear) we are hopeful it is voted out soon and moves along the legislative process in the coming weeks.

For more about the legislation, check out this video of a taped segment on Austin's Fox 7 News featuring myself and a prominent GOP consultant both agreeing that legislation like Rep. Moody's HB 507 is in the best interest for Texas.

The Secretary of State’s office responded to our vote-by-mail petition, but Texans still need clarity
3 days ago

Gov. Abbott issued a "stay-at-home” order, but his partisan programming prevents him from saying it
4 days ago