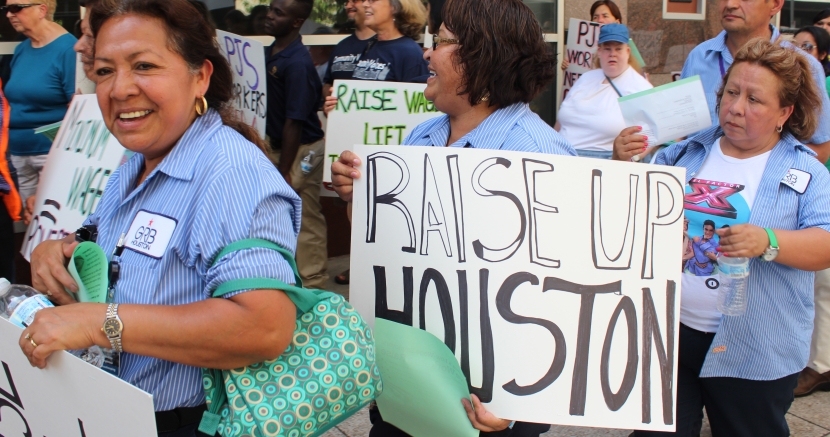 It should go without saying: raising the minimum wage to a livable wage is long overdue.

This week marks seven years since the last time the Texas — and the federal — minimum wage was increased in 2009. It should go without saying: raising the minimum wage to a livable wage is long overdue.

At a mere $7.25 an hour, the minimum wage in our state has failed to keep pace with the cost of living. The minimum wage in Texas today stands at about 35% of the national average wage, a historic low. A minimum wage worker in Texas working full time can expect to earn approximately $15,080 — below the federal poverty line for a family of two.

While low-wage Texas workers have yet to see the benefits of the so-called “Texas Miracle” economy, an increase in the minimum wage would yield tremendous gains not just for minimum wage workers and their families, but for the state as a whole.

Texas has more minimum wage workers than any other state, and for many hardworking families it can be extremely challenging to make ends meet on only $7.25 per hour. Raising the minimum wage would have a significant impact on the Texans who already face structural economic inequality. Over 60% of minimum wage earners in Texas are women. Black and Latino workers are also disproportionately likely to work in minimum wage jobs.

According to data compiled by Center for Public Policy Priorities (CPPP), a worker in central Texas would need two full-time minimum wage jobs just to cover their own basic living expenses like food, housing, healthcare, and transportation.

Conservative myths on raising the wage have been busted across the board.

It’s also important to remember that, contrary to myth, the minimum wage is not necessarily just a “starter wage” meant for teenagers. In fact, analysis from the CPPP found that most low-wage workers in Texas are between the ages of 18 and 54, and almost half have children to support.

Raising the minimum wage does not automatically lead to job losses in low-wage jobs. In fact, a Goldman Sachs study found that the 13 states which have raised their minimum wage had faster employment growth rates than those states that did not raise their minimum wage.

Beyond the purchasing power benefits low-wage workers and businesses would gain from increased income, there’s actually more evidence to show that raising the minimum wage would help employers. When employees are more economically secure they tend to be more productive and more likely to stay in their jobs for longer time periods, which makes it less expensive to retain employees in the long term.

$7.25 an hour is clearly far from a living wage. That’s why 29 states and many local jurisdictions around the country have instituted minimum wages that are higher than the federal standard. Unfortunately Texas state law prohibits our cities from independently raising the minimum wage like they have in other states. However, some Texas cities and counties have established a much higher minimum wage for their employees and the employees of contractors. For example, the City of Dallas now requires a minimum wage of over $10 for both city employees and city contractors, and the City of Austin and Bexar County both pay their employees a minimum of about $13 an hour.

Last session Democratic legislators filed multiple bills aimed at creating a fairer minimum wage and empowering local communities to set their own standards, but these measures were blocked by Republicans.

Continued grassroots pressure, such as through the Fight for $15 movement gaining wins throughout the country, remains vital if we want to see a fairer minimum wage that will strengthen our economy and give greater to support to the hard-working Texans who need it the most.