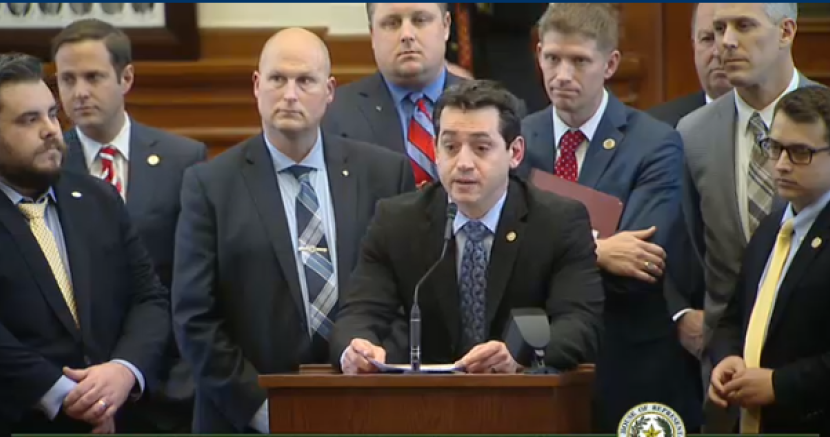 Republicans used the bill as a vehicle to pile on abortion restrictions so extreme they stalled during session, while Democrats fought to stop them from further restricting access and shaming women.

Less than a year after the U.S. Supreme Court struck down two major Texas abortion restrictions as unconstitutional, anti-abortion lawmakers in Texas — undeterred by the Court calling out the lies they used to justify these restrictions — passed another disturbingly wide-ranging anti-abortion bill, Senate Bill 8. During an emotional debate over the bill that lasted more than five hours, anti-abortion lawmakers proposed amendment after amendment to exacerbate the already twisted bill, while Democrats fought the cruel measures — proposing amendments that would mitigate the constitutionality concerns and undue harm caused by passage of the bill and raising procedural errors to block the bill.

In addition to forcing the burial or cremation of embryonic and fetal tissue, SB 8 bans the donation of fetal tissue for research and codifies into state law a federal ban on an abortion procedure not used in medical practice. SB 8 was also amended to include a ban on the safest and most common method of second trimester abortion, which if implemented, will amount to a defacto ban on abortion after 13 weeks.

Before SB 8 reaches Gov. Greg Abbott for signing, the Senate must approve changes made to the bill by the House.

SB 8 forces the burial or cremation of embryonic and fetal tissue following an abortion.

Though abortion providers would be required to coordinate the burial or cremation, this provision of SB 8 effectively forces women, regardless of their own wishes or religious beliefs, to cremate or bury their embryonic and fetal tissue after an abortion. This cruel measure is entirely medically unnecessary and is designed to stigmatize and shame women and cut off access to abortion.

Earlier this year, a federal judge blocked the implementation of a corresponding rule — proposed by Governor Greg Abbott just days after the Supreme Court decision — acknowledging these restrictions do nothing to promote public health but would rather impose an undue burden and harm women. And yet, Texas anti-abortion lawmakers prioritized passing SB 8 instead of addressing the state’s maternal mortality crisis.

SB 8 was amended to include a ban on safest and most common method of second-trimester abortion.

This provision of SB 8 — which was filed as a stand-alone bill in the both chambers and failed to reach a vote on the House floor — bans the safest and most commonly used abortion method performed in the second trimester, dilation and evacuation (D&E), by criminalizing doctors and uses unscientific and inflammatory language to stigmatize the procedure. The measure would effectively ban doctors from performing abortion after 13 weeks because alternative methods could endanger the life of the woman. As the Texas Observer reported, the bill gives a prosecutor the ability to charge people other than the doctor: for example, a receptionist at the clinic or a someone who drove the woman to the clinic.

This ban is a dangerous and cruel restriction in its own right but gets even worse when put in the context of the devastation to access caused by previously passed anti-abortion restrictions. Though the Supreme Court struck down two major provisions of a 2013 law that shuttered more than half of the state abortion clinics, many of these clinics remain closed and the impact of the closures still affects access throughout the state. A 2016 study of state data revealed that in closing clinics, anti-abortion lawmakers pushed 27% more women into obtaining abortion after 12 weeks.

65 Republicans voted to force a woman to carry to term fetus that cannot survive outside womb.

Among the amendments extreme anti-abortion politicians proposed during the debate was an unspeakably vicious proposal by Rep. Matt Schaefer (R- Tyler) to strike the “severe fetal abnormality” exception to the state’s 20-week abortion ban. A "severe fetal abnormality" is defined by law as “a life threatening physical condition that, in reasonable medical judgment, regardless of the provision of life saving medical treatment, is incompatible with life outside the womb."

Though the measure was voted down — which was also proposed as amendment by Rep. Schaefer last session — 65 members of the House voted to force a woman to carry to term a nonviable pregnancy.

Forcing someone to carry an unviable pregnancy to term is cruel & disregards any bodily autonomy. This is cruel, even by #txlege standards.