Texas Freedom To Marry; Back In Court 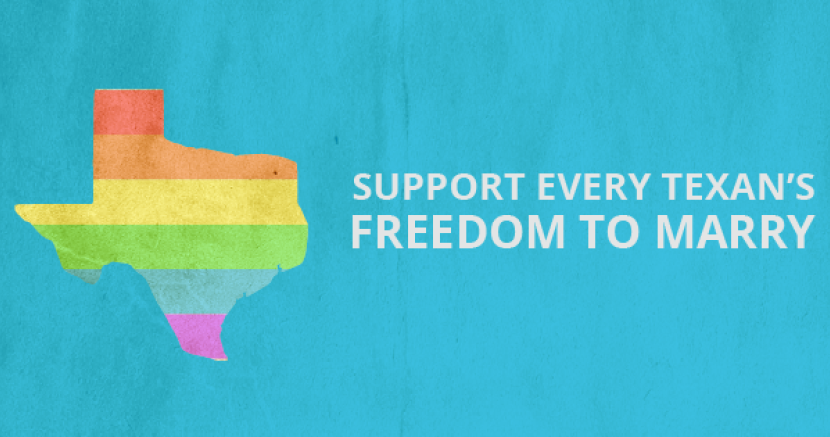 Texas Republicans are continuing their discriminatory crusade against marriage equality, taking their case to the U.S. Court of Appeals for the Fifth Circuit this Friday.

While a lower district court ruled that Texas’ ban on same sex marriage was unconstitutional because it “violates plaintiffs’ equal protection and due process rights,” Governor-Elect Greg Abbott appealed the decision, and, as a result, loving families continue to be denied the right to be recognized under the law.

Sign our petition and show your support for every Texan's freedom to marry.

Nearly 70% of Texans support the freedom to marry or civil unions, yet Abbott and his cronies remain on the wrong side of history.

Supreme Court decisions over the last several years—first in 2013, when the Supreme Court struck down the Defense of Marriage Act (DOMA), and again in October 2014 when the Court let stand appeals court rulings in favor of same-sex marriage— indicate that it is only a matter of time before marriage equality will be the law of the land in Texas. And appellate court rulings have made same-sex marriage legal in almost three-quarters of the country.

The Texas Observer points out:

“On the same day as oral arguments at the Fifth Circuit, the U.S. Supreme Court will meet to decide whether to hear same-sex marriage cases from four other states, which could pave the way for a nationwide ruling in favor of marriage equality as early as June. As of Tuesday, when same-sex marriage takes effect in Florida, Texas will be one of only 14 states where it’s still prohibited.”

Meanwhile, Greg Abbott— and the 63 Republican state legislators that signed a brief comparing same-sex marriage to incest and pedopheila—insist on dragging Texans and our tax dollars through another lengthy legal proceeding which will never amount to anything of permanence.

Show your support for loving Texas families! Sign our petition to let Greg Abbott know you support every Texans’ freedom to marry.