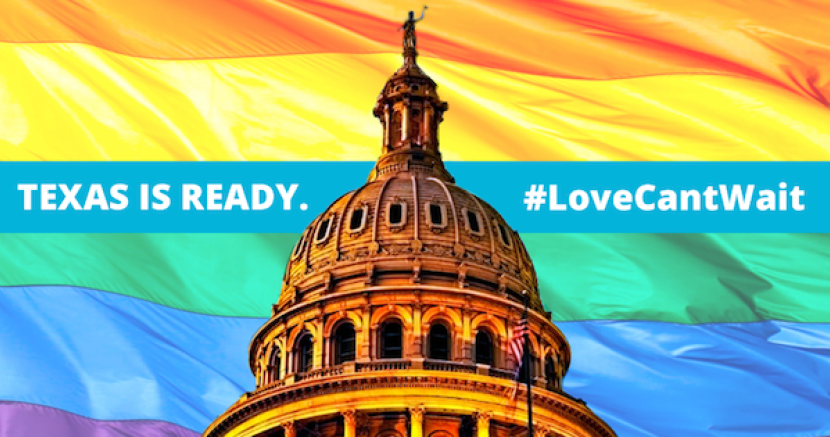 Ed. note: this post was originally published on May 15, 2015. It has been updated to reflect recent legislative developments.

Last week, Texas House Democrats prevented House Bill 4105, a bill that would bar Texas from issuing marriage licenses even if the Supreme Court rules in favor of marriage equality, from hitting the House floor. While House Democrats’ successful effort to kill HB 4105 is a decisive victory for the majority of Texans who believe that discrimination is not a Texas value, the bill’s Republican author, Rep. Cecil Bell Jr., has vowed to revive the discriminatory measure. And it could be back as amendment to another anti-gay marriage bill, SB 2065, set for a vote on the House floor on Thursday.

Click here to tell the Texas GOP you support the freedom of every Texan to marry the person they love.

With nearly the full roster of House Republicans signed on as co-sponsors to this grossly discriminatory legislation, had HB 4105 gone up for a vote before the midnight deadline, it would have likely passed. These backwards politicians have shown that they will stop at nothing: they are hell bent on embarrassing Texas with this despicable bill.

“No bill is dead, as long as there are other bills in front [further along in the process]. You just have to find something that’s germane. … We will continue to look for places that it fits [and] work to get this effort … done.”

In a particularly poignant statement, one of many House Democrats who worked tirelessly to defeat HB 4105, Rep. Celia Israel, wrote:

“This bill dying means that same-sex couples across the state will not be forced to witness their elected representatives debate if their love is as worthy as their neighbor’s… But when a colleague attacks your family just for being who you are, it is impossible to not take it personally. My family, and the millions like it, took this bill very personally…Texans are ready for marriage equality, and I look forward to hearing the wedding bells.”

Progress Texas sent a message to Texas House members urging them to vote against HB 4105 on behalf of more than 40,000 Texans who signed a letter expressing their support every Texan’s freedom to marry the person they love. While last week's defeat of HB 4105 should be heralded as a victory, the battle to stop discrimination against LGBT Texans is not yet over.