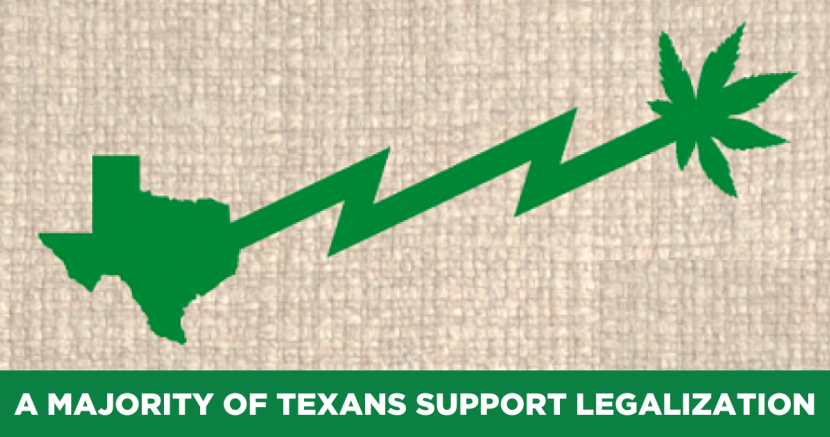 Robert Dean
While legalizing marijuana in Texas seems like a strictly partisan issue, the demographics are shifting.

Almost every day, someone’s name winds up in print, citing an overdose from pill addiction. As a whole, the United States loses almost 80,000 people to pills annually, and for some folks, they’re advocating for a better way to deal with pain, along with the life that comes with that addiction.

"I lost my family to pills,” Gene Dietrich said. “My mom and dad were a part of the VA system. They didn't diagnose pain, they gave people prescriptions, which led to more pills to solve for other problems. I'm the only one left from my immediate family. I’m alone. Now that I'm a geezer, I've noticed aches and pains I didn't have before, which led me to get into CBD. Getting into this business changed my life."

When Gene and Elsie Dietrich opened The Green Mountain Flower Company in northwest Austin a few years back, they did so with purpose. The retired construction worker saw the effects of what his family went through and it affected him.

While there’s the obvious health and safety concerns for the betterment of all people across Texas, we could use the help financially, too.

Texas is broke. According to the comptroller, the lasting impacts on the state from the coronavirus are enormous, like a $4.6 billion hole in the state budget, enormous. We lost truckloads of cash from canceling South by Southwest, the Houston Rodeo, the State Fair, and San Antonio's Fiesta in 2020.

Over two million jobs are gone, and just when it looks like things are about to swing back into somewhat normal, we take a downward shift, again (please wear a mask). Texas needs a major economic shot in the arm. There aren't enough George Strait records and brisket sandwiches to peddle to get our economy humming.

As recently as early December, the House of Representatives passed a decriminalization bill that would open the country's economy up to legalized marijuana. What should be a clear-cut win given the overwhelming data showing that the public wants weed legal, the codgers in the Senate on the right side of the aisle will do their best to shoot it down and make it a state's rights issue. A Pew Research Center survey showed two-thirds of Americans favored legalizing marijuana, but because GOP opposition is expected in the U.S. Senate,  unless the Democrats get an early Christmas gift, Texas will need to stand on its own to move toward legalization.

State Senator Roland Gutierrez of San Antonio and State Rep. Joe Moody of El Paso filed bills for the 2021 Texas Legislative session to legalize, regulate and tax cannabis use. State Rep. Terry Canales of Edinburg wants to put the topic to the Texans. Fifteen states have opted for legalization. Back in 2019, Colorado generated  more than a billion dollars in revenue from legalizing. Illinois has only had legal pot for a year and they've passed the $100 million mark.

While legalizing marijuana in Texas seems like a strictly partisan issue, the demographics are shifting. The folks calling for an adult conversation aren't the long-haired hippies. Support is moving across the board and in unlikely places.

Despite living in the Austin-area, the Dietrich's aren't typical liberals, instead, Gene aligns himself more with center-right values than what's expected.

"Look, hemp and marijuana work,” Dietrich said. “I see people with anxiety, bad backs, messed up stomachs, and just about every other ailment you can imagine. Just because I lean conservative on some stuff doesn't mean I don't see the value. I bet my life on it."

When Texas lawmakers legalized hemp and CBD in 2017, the laws got complicated. Nothing in the state can offer more than 0.3% THC, but because stores can sell CBD buds by the ounce, How can a cop tell without a comprehensive lab test? Most of Texas' major cities have adopted laws centered around writing a misdemeanor ticket rather than levying significant jail time for getting caught with weed clearly for personal usage. Dallas City Council member Adam Bazaldua announced he intends to propose the "decriminalization" of low-level marijuana possession in 2021. Austin and Houston already have similar laws on the books.

Sid Miller, the Texas commissioner of agriculture, was a dismissive pain in the ass for years on the subject thanks to his Good Ole' Boy Network stretched across the state in various dealings. But since the rise of hemp has shown a real economic boom, with recreational usage bound only to increase that dollar amount, Miller, the ultra-conservative, somehow has become a voice of reason on the subject while resident ghoul Lt. Gov Dan Patrick continues to be a significant roadblock for advocacy.

"Think about the jobs we'd create,” Dietrich said. “We'd put money toward infrastructure, schools, and help regular people pay less taxes. Montana and South Dakota, two states way more conservative than us passed to legalize. We should be making that money, too."

If one right-leaning retired construction worker can develop this kind of advocacy, think of what we could do if everyone got on board with changing Texas for the better, one bud at a time.