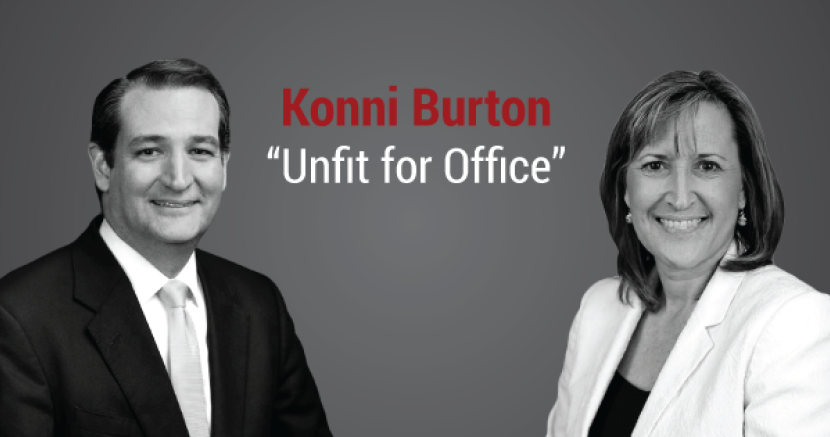 Tea Party Nominee Wants To Be Next Wendy Davis

A Tea Party nominee wants to be the next Wendy Davis. That’s terrifying.

Ted Cruz is all in behind Burton, citing her as one of his most important supporters:

“In the Senate race, when it was impossible…when we had no money, no endorsements, no support, Konni Burton was there. Now, that might just tell you she’s a little bit crazy.”

Now, Burton - someone with no experience save moving quickly up the ranks of an extremist political group - could end up as a the pivotal deciding vote in the State Senate with a very scary, unstable presence in Texas politics.

We’ve already seen what she's capable of in two areas: campaigning by homophobic supporters she refuses to denounce, and doctors from her district writing that she is “unfit for office.”

When the National Family Coalition put out mailers earlier this month attacking Libby Willis for “supporting the radical homosexual agenda” and endorsing Konni Burton for SD-10, Burton made no move to condemn the groups hateful attack. Instead, she simply dismissed it. Texas needs leadership that supports all Texans.

When the Texas Medical Association endorsed Libby Willis for SD-10, Konni Burton lost it, and started claiming that physicians want to murder their elderly patients and that she would do everything in her power to stop them. A memo responding to Burton's outburst said the following:

The Tea Party has proven time and again that no matter what’s right for Texans, they will posture on behalf of the Party's messaging, and Burton is no different. Because for the Tea Party, personal political agendas will always come first.