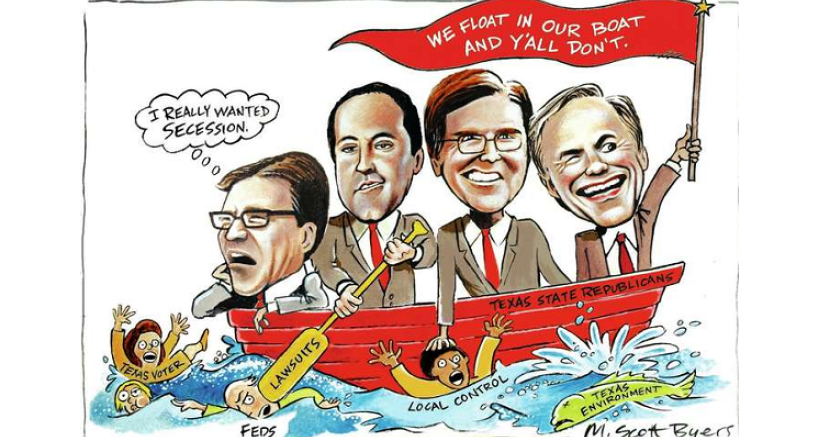 Republicans dominate Texas state government. Consequently, they believe the state-level government is the supreme government, the feds and the locals be damned.
The following column originally appeared in the Austin American-Statesman.
Texas’ Republican leaders sure do love government — their own government, that is.

Republicans dominate Texas state government; the federal and local governments, not so much. Consequently, in the Texas GOP’s opinion, state-level government is the supreme government, the feds and the locals be damned.

Rest assured that Republicans aren’t lost in this odd political dream in, say, California or New York, where Democrats dominate state government. Who said Republicans were so hidebound they couldn’t be morally and politically flexible when necessary?

“The issue’s not over,” Abbott said after the votes were counted. “Republicans in the Texas Legislature have already raised proposals coming up in the next session to override the Austin vote.”

Other Republicans, like state Sen. Charles Schwertner of Georgetown, were even more strident in their attacks on Austin voters. The city is full of anti-free-market types who stifle innovation, he said.

However, after Lyft and Uber left Austin because of the vote, other innovators and entrepreneurs moved into the market with new ride-hailing companies, making Republican complainers look like special interest uber-lackies, so to speak.

Abbott, Lt. Gov. Dan Patrick, Attorney General Dan Patrick and other Republican leaders have also attacked local government decisions on everything from controls on fracking to bans on plastic grocery bag and civil rights ordinances. Despite decades of lip service to the wonders of “local control,” the Texas GOP demands fealty to their power over the wishes of local voters.

Still, it is the federal government under President Barack Obama that gets most of the Texas GOP wrath — and a very expensive wrath it is for Texas taxpayers, too.

Texas GOP leaders have sued the Obama administration at least 40 times since the president took office in January 2009. As attorney general, Abbott filed 31 of those lawsuits. After Abbott became governor, Paxton took over as attorney general. He’s already sued the feds nine times.

When he was attorney general, Abbott told a tea party group, “I go into the office, I sue the federal government and I go home.” Nice work if you can get it. Given the cost of all those suits, it was “taxing” work as well.

All this legal huffing and puffing cost has more than $5 million. That’s a lot of money to spend to blow off steam and gain a few public relations points for your political party.

To be fair, the state has won a handful of these cases, with most of the victories having to do with challenges to federal air-quality standards. Texas ranks 42nd among the states in air quality, according to the United Health Foundation. So, if you like mercury, ozone and particulate matter in your air, this was money well spent.

The state lost 10 of its legal challenges, including suits against the Affordable Care Act and federal greenhouse gas limits. Other lawsuits were withdrawn or are still pending in the courts.

Paxton just filed one of those pending cases — this one against federal guidelines for transgender students. This is Paxton’s potty police lawsuit filed after he persuaded a North Texas school district to pass a rule contrary to the guidelines just so he could sue on behalf of the district.

We might expect voters who don’t share the disdain for local governments and the federal government to rise up and put this emerging supremacist state government in its place. Sadly, GOP leaders already considered that danger and passed the most restrictive voter ID law in the country to suppress the votes of likely opponents. That law is also under review in the federal courts; so is the GOP’s incumbent-protecting gerrymandering of legislative and congressional districts.

Former Gov. Rick Perry’s brief public flirtation with Texas secession deserves notice in this context, as does current Gov. Abbott’s off-the-wall demand for a “convention of the states” to radically amend the U.S. Constitution in ways that give state government even more power.

It’s quite a spectacle. The supreme self-regard of state GOP leaders would appear to be the only consistency in their philosophy of government.