A Story to Undo Trump 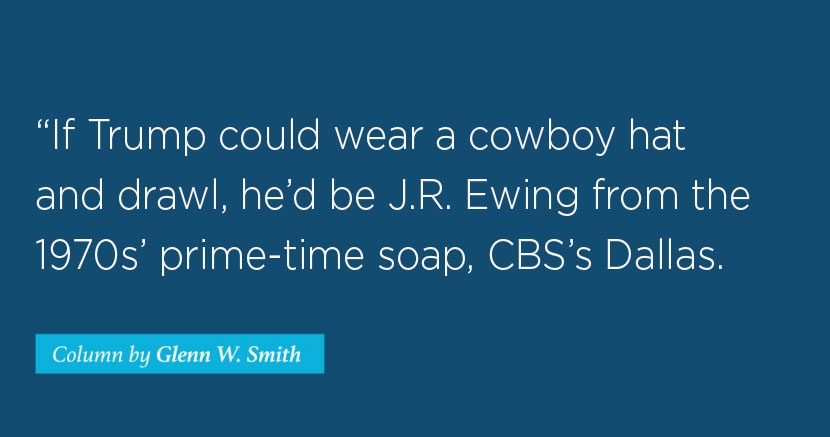 Democrats should learn the lessons of rival TV networks efforts to beat Dallas and J.R. Ewing in the ratings. Tell a completely different story.

You’ve noticed, of course, that Donald Trump never smiles. The film loop running in his head comes from his beloved World Wrestling Entertainment: all Mussolini-jawed bluff, virtual body slams and cheers for the steely-eyed victor scripted in advance.

If nothing else, Trump stays on his mark, in character. Humiliated by Bill Gates, Kim Jong-un or Stormy Daniels, Trump plays on. He’s happiest as the popular soap-opera villain, the center of every televised storm.

Admit it, Texans. If Trump could wear a cowboy hat and drawl, he’d be J.R. Ewing from the 1970s’ prime-time soap, CBS’s Dallas. His character can’t grow because the show’s ratings demand his dependable menace.

Trump, though, is real enough. His actions are devastating democratic institutions, poisoning the Earth’s environment, throwing the international balances of power into disarray, condemning millions to lives of poverty and ill health.

A great and lasting symbol of Trump’s administration will be the kidnapping of children, children taken from the arms of their mothers when families are detained by ICE and investigated as paperless people.

Democrats, cast as TV show runners trying to best Trump’s ratings, hope to do better than ABC and NBC did at undoing J.R. Ewing’s ratings. This was the era of three commercial TV networks, remember. There weren’t hundreds of shows on hundreds of networks available 24/7. This stuff mattered.

NBC’s was an identity politics gambit. They went after J.R.’s Southern plantation mentality with a congenial, mixed-race daring duo that prevailed over sinister villains with charm.

Needless to say, CBS’s competitors couldn’t beat J.R. with a club-wielding avenger and they couldn’t beat him with a couple of nice guys who, on their weekly show, always finished first because of their basic likeability.

The trouble is, big sticks and walking softly fit quite well into Trump’s ongoing WWE storylines. As stereotypes, Eischied, Tenspeed and Brownshoe were all easily subdued by J.R. They didn’t challenge the worldview of Dallas. They played dutiful supporting roles in it.

I’m going to give an answer that might seem sentimental to some. Hold your fire. It’s drawn the world-changing, real-politick lessons of Czech dissident and subsequent president Vaclav Havel to overcome Soviet totalitarianism. You have to admit, that’s not a bad role model.

Havel urged us to discover “a newly grasped sense of higher responsibility, a newfound inner relationship to other people and to the human community.”

“The issue,” Havel said, “is the rehabilitation of values like trust, openness, responsibility, solidarity, love.”

To advance these values, to showcase them in our story, we have to stay out of the wrestling ring with Trump and create an altogether different storyline with no role for unsmiling demagogues.

It means telling a story that brings hope to people’s hearts without resorting to rose-colored glasses. We can’t banish suffering and we can’t reach perfect equality and justice. We’ll lose viewers if our story pretends as much.

Still, we can march toward justice and show that we’re going to smile more as we do. We’ve watched this work in recent history, folks. Think of the Civil Rights Movement.

And, just like that movement, our story has to be inclusive without setting one identity category over against another. One of the reasons Rev. Dr. Martin Luther King succeeded was that he made us all part of his march.

Havel asked, “For the real question is whether the brighter future is really always so distant. What if, on the contrary, it has been here for a long time already, and only our own blindness and weakness has prevented us from seeing it around us and within us, and kept us from developing it?”

We can answer that.