Stay-at-home is where the heart is 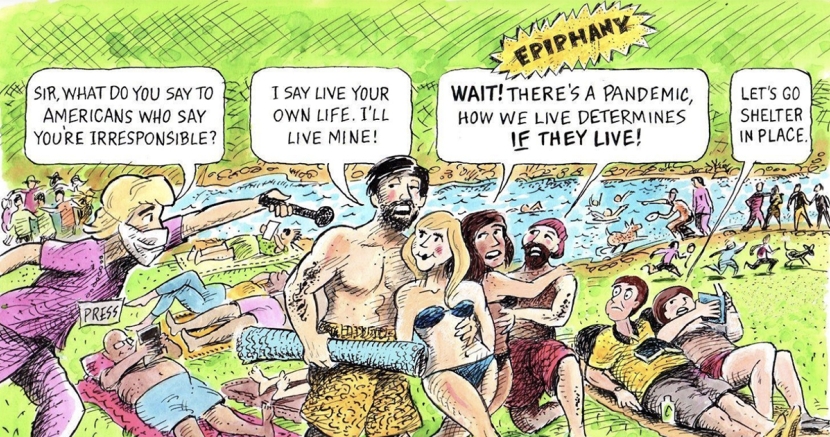 Many conservatives today are still arguing that we should be doing less — relaxing restrictive stay-at-home orders for instance — to combat the coronavirus. This despite the virus’ spread throughout Texas and the country.

One can watch the number of victims grow in real time. It’s like a macabre lottery in which the odds are reversed: The more the number of cases and deaths increase, the better one’s chances of having one’s number called.

The path advocated by many conservatives seems to be based on rather cold calculations that the loss of those whose numbers are called is justified by the economic benefits to those lucky ones who escape the disease.

Close to home, Travis and Williamson counties have implemented aggressive “Stay at Home, Work Safe” policies. Critics say they went too far and should instead protect local economic dependence on restaurants, bars and other entertainment and hospitality businesses.

For instance, they want to let some restaurants and bars re-open with limited seating, prohibit only large gatherings, urge good hygiene, isolate the ill. Places like Singapore, Hong Kong and Taiwan are cited as successful examples. But, those places had massive testing and incredibly sophisticated tracking and tracing of victims and their contacts, things our federal government fell behind on early.

What parents would concoct a statistical formula to decide whether to send their children out for milk when they knew a pack of rabid animals was loose on their block? Damn few, I’d guess, no matter how badly they needed the milk.

Central Texas leaders deserve credit for their “Stay at Home, Work Safe” actions. Judging by the fact the first cases of COVID-19 were reported here in the middle of March, the area is running about a month behind, say, King County (Seattle), Washington. The early action should “flatten the curve” more quickly here.

Although Gov. Greg Abbott had been following the laissez-faire approach advocated by conservative groups, he has now ordered a statewide stay-at-home order.

Estimates say that by the middle of April the region may have more than 1,000 positive cases. Apply a 2 percent mortality rate, and we would have 20 or more deaths. That may be an overly conservative number, but we would be in far greater danger had local actions to protect our health and safety been less restrictive.

University of Texas officials released a study showing we needed to reduce our personal contacts with others by 90% if we are to avoid exceeding the capacities of our hospitals. It is said that we are far short of that at the moment, only reducing our contacts around 40% or so.

Those reducing their personal contacts and so limiting the spread of the disease are doing so out of concern for their own health and safety as well as the health and safety of their families, friends, co-workers and the community at large.