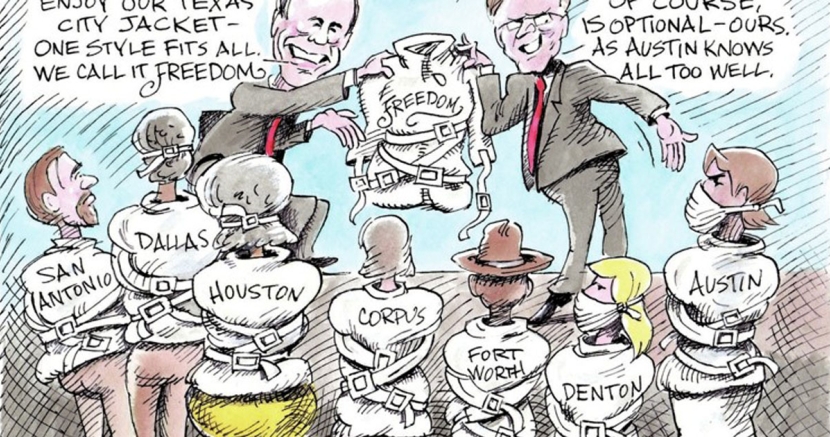 Special Session Might Be Known as "the Summer the Music Died"

Abbott, Lt. Gov. Dan Patrick and others are becoming the government equivalents of helicopter parents.

“I tell you friends there’s a song in every town,” Pat Green warbled in his hit “Songs About Texas.” It’s hard to argue with that, given the evidence.
Dallas, wrote Jimmie Dale Gilmore, “gives a beautiful light,” at least when seen from a DC 9 at night. Glen Campbell could hear Galveston’s “sea winds blowing” from the jungles of Vietnam. Bob Wills swung with “A Ding Dong Daddy from Dumas.” Yes, Dumas has a song.

This comes to mind as Gov. Greg Abbott and the Texas Legislature begin a special summer session to — among other ugly things — muddy up all that local color with renewed efforts to mute the voices of local residents.

The Republican-led Legislature will step up its efforts to pre-empt decisions of local voters on issues ranging from local taxes to tree protection, bathroom use, annexation and driving while texting. Next thing you know, they’ll order the removal of town names from water towers.

The political implications of this assault have received some notice, but too little attention has been paid to the cultural consequences, which could be heartbreaking.

Listen: Fort Worth is not like Houston, and the loyalists of both towns are glad for that fact. Laredo and Texarkana are as different as the distance between them suggests. Austin is weird, the locals brag, but El Paso earned its own time zone, called, poetically enough, Mountain Time. Central Time is so middle-of-the-road.

And while both San Antonio and Tyler gave us famous roses, the towns are as wonderfully unique as Earl Campbell and the melody deep within Bob Wills’ heart.

Many rural lawmakers – mostly Republicans, in fact – have recognized the threat to local life when it comes to issues like school vouchers. In many medium-sized and small towns, social life and culture revolve around public schools. These lawmakers won’t sacrifice their hometown culture — think “Friday Night Lights” — to the ideological whims of school privatizers.

A little sympathy for the cities from these rural legislators is called for. Every town and city has a culture of its own. Those unique cultures are reflected in and by the political decisions of local residents. Take away the latter and we’ll lose the former. Cities would become mere institutional vassals of the state, conditioned upon their loyalty and allegiance to state leaders.

As framed by Abbott, rural Republicans might think this is a defense of their cultures against urban cultures. It’s not. It’s the threatened erasure of local cultures — period.

Listen to the late Paul Weyrich, icon of the right and co-founder of the American Legislative Exchange Council (ALEC): “Small scale is critical to local life, to the ability of local people to control what happens where they live.”

That was then; this is now. “Thanks in part to ALEC’s promotion of the concept, [local] pre-emption has become the most powerful statehouse tactic of our time,” writes Slate’s Henry Grabar.

In our system of government, there are times when a higher level needs to intervene with a lower level. The historic move to end state-enforced racial segregation comes to mind. Texas leaders’ current usurpation of local decision-making isn’t based on such moral urgency.

Abbott, Lt. Gov. Dan Patrick and others are becoming the government equivalents of helicopter parents.

The Legislature will be up to other mischief this summer. School funding will probably be overlooked. Women will likely lose more rights over their bodies. Lawmakers will continue to only “study” the tragic increase in maternal mortality in Texas.

Many of the policies on Abbott’s session agenda are hateful, even dangerous. In this context, it might be easy to overlook the consequences of the assault on local culture.

The places and people and culture we love most in Texas are, you might say, locally grown. This is as true for a conservative in Perryton as it is for a liberal in Houston. Our state leaders should recognize that fact.